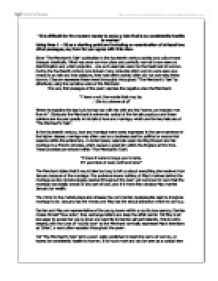 &quot;It is difficult for the modern reader to enjoy a tale that is so consistently hostile to women&quot; Using lines 1 - 30 as a starting point and including an examination of at least two other passages, say how far you agree with this view.

"It is difficult for the modern reader to enjoy a tale that is so consistently hostile to women" Using lines 1 - 30 as a starting point and including an examination of at least two other passages, say how far you agree with this view. Since "The Merchant's Tale" publication in the fourteenth century society and culture have changed drastically. What was once common place and perfectly normal is now seen as discrimination and unfair prejudice - one such example would be the treatment of women. During the fourteenth century (and indeed many centuries after) women were seen as a means to an heir and free pleasure, their role within society often did not over-step these bounds. Chaucer expresses these views thoroughly throughout "The Merchant's Tale" by effectively using the narrative voice of the Merchant. ...read more.

In the fourteenth century, love and marriage were rarely expressed in the same sentence in the higher classes; marriage was often used as a business deal for political or economical reasons within the aristocracy. A contemporary example would be King Edward and his marriage to a French princess, which caused a great stir within the England at the time. These practises are evident within "The Merchant's Tale"; "I trowe it were to longe yow to tarie, If I yow tolde of every scrit and bond" The Merchant states that it would take too long to tell us about everything she received from January because of the marriage. The audience knows nothing of May's motives behind the marriage as she remains largely passive throughout the poem yet we know for sure that the marriage was totally devoid of any sort of love, and it is more than obvious May marries January for wealth. ...read more.

This is not in keeping with the rules of "courtly love" so the Merchant comically expresses May's intentions as "pitee", a word often repeated throughout the poem. Yet "The Merchant's Tale" isn't a poem solely published to bash the name of women, or indeed be consistently hostile to women. It is much more and can be seen as a cynical view of many different subjects. All three main characters are satirical elements within themselves and serve to attack several areas of society, not just women. Is Chaucer not presenting a comical view of The Merchant himself? The Merchant's narrative voice used throughout the poem by Chaucer means he is able to add his own opinion to the goings on within the poem; often written with sarcasm. Chaucer could be seen as satirically attacking the Merchant himself, not least due to his history in dealings with merchants when he worked with customs. ...read more.