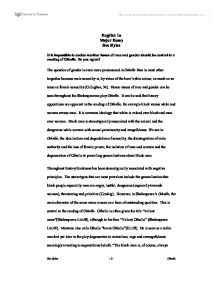 It is impossible to decide weather issues of race and gender should be central to a reading of Othello. Do you agree?

English 1a Major Essay Bec Ryles It is impossible to decide weather issues of race and gender should be central to a reading of Othello. Do you agree? The question of gender is even more pronounced in Othello than in most other tragedies because male sexuality is, by virtue of the hero's skin colour, as much as an issue as female sexuality (Callaghan, 36). Hence issues of race and gender can be seen throughout the Shakespearean play Othello. It can be said that binary oppositions are apparent in the reading of Othello, for example black versus white and woman versus man. It is common ideology that white is valued over black and man over woman. Black man is stereotypically associated with the animal and the dangerous while woman with sexual promiscuity and vengefulness. We see in Othello, the idealization and degradation of sexuality, the disintegration of male authority and the loss of female power, the isolation of men and women and the degeneration of Othello to prevailing generalisations about Black men. Throughout history blackness has been stereotypically associated with negative principles. The stereotypes that are most prevalent include the generalisation that black people especially men are angry, lustful, dangerous (especially towards women), threatening and primitive (Cowhig). However, in Shakespeare's Othello, the main character of the same name is seen as a hero of outstanding qualities. ...read more.

In Othello, greater contrast is placed between Iago and Othello than on Desdemona and any of the other women. This is because women were all seen as the same. The stereotypes that women are generalised under are that they seem to be vengeful, duplicitous, sexually promiscuous, always talking and out of their husbands or fathers control. Brabantio believed that his daughter Desdemona was the perfect daughter, the exception to the misconceptions that all daughters are out of control of their fathers. This is best described by Brabantio himself when he states: "A maiden never bold; Of spirit so still and quiet that her motion Blush'd at herself" (Shakespeare I.iii.95-97) But he no longer thinks this upon her marriage to Othello. Brabantio seems to be right when he says that upper class white Venetians do not usually marry moors such as Othello. This was seen as something that just wasn't done when the play itself was written. This is kept in the back of the mind while reading Othello. Desdemona is accused of being domineering, of using witchcraft, of rebelliousness, disobedience and wantonness all common generalisations about females when the play was written and even a little still today. However, the reader realises that Desdemona has none of these traits, she like Othello is not the expected norm. Even though she has transgressed and is no longer seen as perfection by her father (Callaghan, 153). ...read more.

It seems as though Othello fears Desdemona's desire because it invokes his monstrous difference from the white, educated world. Desdemona threatens to confirm his difference according to racial stereotypes about black male sexuality. (Neely) The generalisation that men are supposed to be manly can be seen in this Shakespearean play: "I took by th' throat the circumcised dog And smote him - thus" (Shakespeare V.ii.253-254) In these lines, Othello is both the 'I' and the 'circumcised dog'. Othello was seen as 'manly' and brave due to his military expertise. The symbolic extension of the phallus, the sword, has shown that suicide is the only honourable act left for him. He does not want to be a failure, he wants to be admirable (Callaghan, 93). Especially, being a black male he does not want to be generalised as being irrational, sexually promiscuous and credulous. Othello's race is essential to the reading of the Shakespearean play. To fully understand the play it is essential to know of the typical generalisations made about black men. At the beginning of the play Othello seems to be nearly "white skinned" as he is a brave and honest man, but he transforms into peoples preconceptions about black men - that they are animal like, angry and dangerous (especially women). This is seen in his killing of Desdemona. The issue of gender also plays a part in the Shakespearean play. Women are associated with being sexual promiscuous so Iago uses these generalisations to make Othello see that Desdemona is like all other women. ...read more.