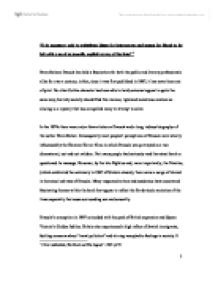 It is necessary only to substitute kisses for intercourse and s***n for blood to be left with a novel as s******y explicit as any of the time&quot; [1] Bram Stokers Dracula has held a fascination for both the public

"It is necessary only to substitute kisses for intercourse and s***n for blood to be left with a novel as s******y explicit as any of the time" 1 Bram Stokers Dracula has held a fascination for both the public and literary professionals alike for over a century, in fact, since it was first published in 1897; it has never been out of print. No other Gothic character has been able to hold universal appeal in quite the same way, but why society should find this morose, rigid and monstrous creature so alluring is a mystery that has compelled many to attempt to solve. In the 1970s there were only a few articles on Dracula and a long, tedious biography of the author Bram Stoker. Consequently most peoples' perceptions of Dracula were wholly influenced by the Hammer Horror films in which Dracula was portrayed as a two dimensional, out and out evildoer. Not many people had seriously read the actual book or questioned its message. However, by the late Eighties and, more importantly, the Nineties, (which celebrated the centenary in 1997 of Stokers classic); there came a surge of interest in the actual sub-text of Dracula. Many respected writers and academics have uncovered fascinating themes within the book that appear to reflect the fin-de-siecle anxieties of the times especially the issues surrounding s*x and sexuality. Dracula's conception in 1897 coincided with the peak of British expansion and Queen Victoria's Golden Jubilee. Britain also experienced a high influx of Jewish immigrants, fuelling concerns about "racial pollution" and stirring xenophobic feelings in society. ...read more.

Lucy has committed a role reversal here because she "draw[s] nourishment" from the child rather than the natural mother-child relationship16. By attacking children, Lucy becomes the embodiment of the worst possible characteristic of the New Woman, the vicious rejection of the nurturing role. A disturbing thought is the reaction of one of the bitten children who asks to leave hospital because "he wanted to play with the "Bloofer lady"17. This suggests tentatively that the child enjoyed the experience and wishes to repeat it. If we associate the nature of a vampire attack with a s****l act not only do we have the implication of paedophilia but also of latent sexuality in children. The act of dying in Dracula also takes on s****l overtones by the use of a stake (phallic symbol) in the destruction of Lucy. Her contorting and writhing bears more than a passing resemblance to an o****m (the o****m has been described as "a little death" in many cultures) and it is Arthur, her husband, who is charged to "drive deeper and deeper the mercy-bearing stake as the blood...spurted up around it"18 The effect on Lucy's unwilling body was that "the Thing in the coffin writhed... the body shook and quivered and twisted in wild contortions ". 19 "... the s****l initiative is restored to the men...by negation of Lucy's aggressive female sexuality. She can henceforth live on as a beautiful, spiritual memory for all of them - her troublesome physical presence removed".20 This act of explicit gang r**e sums up the Victorian attitude that "a woman is better dead...than s****l"21 Dracula's victimization of Mina forces her to become more like Lucy (New Woman) ...read more.