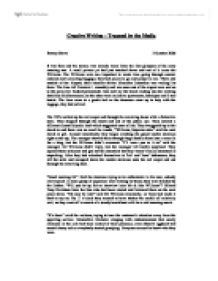 It was 9am and the tarmac was already warm from the first glimpses of the early morning sun.

Creative Writing - Trapped by the Media Barney Grove 3 October 2006 It was 9am and the tarmac was already warm from the first glimpses of the early morning sun. A small private jet had just touched down and out of it came the Williams. The Williams were too important to waste time going through normal customs and collecting baggage; they had places to go and people to see. There just outside of the Airport, their chauffer driven Mercedes limousine was waiting for them. The limo left Terminal 1 smoothly and was soon out of the airport area and on to the palm tree flanked promenade. One side lay the beach leading into the inviting dark blue Mediterranean; on the other were exclusive apartments, boutiques and 5 star hotels. The limo came to a gentle halt as the doorman came up to help with the luggage, they had arrived. The VIPs walked up the red carpet and through the revolving doors with a distinctive style. They stepped through the doors and out of the public eye. ...read more.

"Oh may be later" said Mr Williams reluctantly, as Tony had made it hard to say no. By 11 o'clock they seemed to have shaken the media off relatively well, so they went off in search of a trendy beachfront caf� for a mid morning snack. "It's them" cried the waitress, trying to turn the customer's attention away from the appalling service. Meanwhile Michelle cringing with embarrassment that nearly everyone in the cafe had been alerted of their presence; even Shaun's egghead had turned cherry red as everybody started gossiping. Everyone seemed to know who they were. It had all started on the day that they had won the lottery - big time. You see they weren't pop stars or anything grand, just simple Shaun & Michelle Williams from Newcastle. The problem with their winnings was that people seemed to doubt that they won and there was suspicion and rumours that they had a forged a ticket! As The National Lottery had no evidence that they had forged a ticket and not won the jackpot, there was nothing whatsoever they could do about it. ...read more.

There it was hairdressers - Ext 927 on the internal phone. Roughly an hour later they came out with a distinctive new style. Michelle and Shaun slid down the exquisite marble staircase and out through the revolving doors in the same old style. FLASH went the cameras. The Williams were shocked, annoyed and depressed; couldn't they just be left alone? They ran back to their suite much the same way as they had come out, but much quicker and this time they went out onto there balcony. "OH NO" shouted Shaun. There new enemy was still their ready to pounce on them. "I've had enough, I am going". "Where"? Questioned Michelle. "You're coming with me" blurted Shaun. "AAAAAHHHHH" shouted Michelle. Shaun had jumped off the balcony 7 stories high onto the main road; he had taken poor Michelle with him. "We did win the lottery didn't we Shaun" asked Michelle fearing she would not get to heaven. Shaun wasn't even interested, Michelle didn't bother asking him again, she just prayed to god. "Hey we're going to hit that blue BMW honey, I wonder what the driver will think?" ...read more.