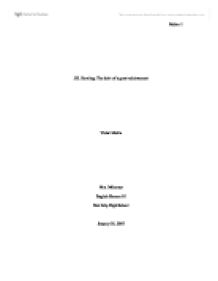 J.K. Rowling: The clat of a great achievement.

J.K. Rowling: The �clat of a great achievement Vishal Mehta Mrs. Mahoney English Honors 10 East Islip High School January 25, 2007 Joanne Kathleen Rowling is an English fiction author who has turned a generation of youth onto reading. Rowling is renowned for the creation of the Harry Potter fantasy series, which has caught the attention of both children and adults worldwide. Furthermore, the fantasy series has won Rowling multiple awards and has sold well "over 375 million copies worldwide" (Wikipedia par.1). Though there remains one more book until the celebrated series is complete, Rowling has still accumulated quite a fortune; estimated to be over one billion USD (United States Dollars) (Wikipedia par.1). Rowling's "rags to riches" story has and remains a source of great inspiration for both struggling and established authors. Her novels are a source of entertainment, often substituting for television, movies, and video games in many households across the world. J.K. Rowling's novels consist of an array of characters and various settings, some based off of Greek Mythology, others created purely by imagination and several relating to her own life. However, beneath the light humor and suspense of each book lies a moral lesson. Her stories aim not only to entertain but alert readers to the ills of society, flaws such as prejudice and egoism. Joanne Kathleen Rowling was born in Chipping Sodbury, a small town near Bristol, on July 31st, 1965. It was this very town which Rowling believes "doomed [her] to a love of weird-place names." These names would often be seen in her writing, as they would inspire many of the names for various areas of the Potter's Wizarding world. Joanne, or as her friends and family referred to her, Jo, was an imaginative thinker since birth and writing a full story by the age of six called "Rabbit". Her sister Dianne, who also had a nickname, Di, was born when Rowling was almost two years old. ...read more.

This job did not last long, Rowling found the occupation irrelevant to the real career path she wished to take. She found a more significant profession, researching human rights abuses of the French-speaking portions of Africa at Amnesty International. A few years later her boyfriend asked her if she would like to move to Manchester with him and she agreed. After finding an apartment in Manchester, the two returned to London via train and it was here Harry Potter was created. The train delayed, leaving Rowling on the train for four hours, four hours she spent purely thinking; and as she thought the idea of Harry Potter slipped into her mind. She pictured Harry just as he is in the books today, clearly with his black hair, emerald eyes, and glasses. She was crestfallen when she discovered she had no pen, and so she continued to ponder and create the Wizarding world we all know today. She concentrated on Hogwarts on the train and upon arriving at her home she instantly began taking notes on her newly formed world. She decided to set Hogwarts in Scotland, she considered it a "subconscious tribute to where [her] parents had married.". As time went by she continued to write and as the couple settled in Manchester she took up another sordid occupation, she worked at the Manchester Chamber of Commerce. However her indifferent attitude towards the job led to an early eviction and she moved on to be a secretary at the University of Manchester. Just as Rowling took up her pen again to continue the tale of Harry Potter, her mother died. Her mother, Anne Rowling, died young at the age of 45; she had given in to multiple sclerosis and left Rowling with a feeling of great remorse. Rowling knew of her mother's worsening condition but never gave much thought to it, and was stricken when she heard the news. ...read more.

That same year, in June, the Queen of England honored Rowling by dawning her as an Officer of the Order of the British Empire. Rowling's novels have broken sales records, even being noted as the fastest selling books in history. The speed and amount of money at which Rowling's books sold is greater than that of any blockbuster film. A Guinness World Records Award was given to Harry Potter and the Half Blood Prince for being the fastest selling book ever. Despite her great wealth Rowling constantly cares for those in desperate need for aid and help. She has contributed greatly to society through various charitable causes. A popular charity being Comic Relief in which she wrote two catalogues relating to the Wizarding world in her novels: Fantastic Beasts and Where to Find Them and Quidditch Through the Ages, both of these books were mentioned in the Harry Potter series and so she even went as far as to write under the names of Newt Scamander and Kennilworthy Whisp each being the "author" of one of the catalogues. The books grossed over fifty million dollars and she even contributed a separate twenty-two million to the organization as well. J.K. Rowling is currently married to Neil Murray, an anesthetist, and lives in an estate in Perth and Kinross, Scotland with their three children: their daughter Jessica, their son David and Rowling's youngest child, Mackenzie. Rowling has lived in many different places, suffered tragedy and experienced success. As we look closer at her works we see how her life has been exemplified by her works. Rowling draws her readers through ha fascinating storyline, through the world she created. True, the Harry Potter series may not be noted as a great "lyrical" work, such as Tolkein's fantasy, Lord of the Rings; however, what Rowling lacks in her style she indisputably makes up with her content. The twists near the end of every chapter, ever book, keep the reader on an edge. The witty humor is cleverly placed to break the gloom and darker moments of the series. ...read more.