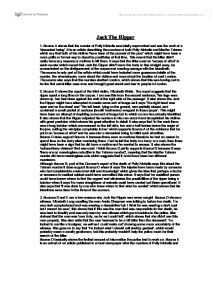 Jack The Ripper 1. Source A shows that the murder of Polly Nicholls was totally unprovoked and was the work of a 'demented being'. It is an article describing the murders of both Polly Nicholls and Martha Tabram which say that both of the victims 'have been of the poorest of the poor' which might have been a more polite or formal way to describe prostitutes at that time. This meant that the killer didn't really have any reasons or motives to kill them. It says that the killer used an 'excess of effort' in each murder which meant that Jack the Ripper didn't leave the body or flee straight away, he concentrated on the disfigurement of the corpse and creating carnage with the bloodbath. The source is only part of the article which could have included more gruesome details of the murder, the whereabouts, more about the victims and more about the location of east London. The source also says that the murders startled London, which shows that this was turning out to be the first serial killer case ever and brought great shock and fear to people in London. 2. Source C shows the report of the third victim, Elizabeth Stride. The report suggests that the ripper spent a long time on the corpse. I can see this from the second sentence, 'her legs were drawn up, her feet close against the wall of the right side of the passage'. It also shows the Jack the Ripper might have attempted to create some sort of image as it says 'The right hand was open and on ...read more.

This source also shows that the police didn't find anything useful to the whereabouts or to who the ripper was because the leaflet was published after the fourth murder which meant they were in desperate need of some immediate details or specifics. It also displays that they were very reliant on the help of the public, 'Should you know of any person to whom suspicion is attached, you are earnestly requested to communicate at once with the nearest Police Station Metropolitan Police Office'. Source G is part of a letter from the Home Secretary to the Mile End Vigilance Committee about the discontinuation of rewarding certain individuals for the discovery of criminals. This source could've shown that the idea of rewarding people for their discovery of criminals was not favored by many because of possible shenanigans that other people played to their own advantage. The letter said that 'such offers of reward tended to produce more harm than good', which could've meant that they were unsuccessful in receiving much help from the public, especially when most could've given the wrong information on the killer to get money. The 'Secretary of State' also probably considered that paying people to end the murders was too superficial and that putting an end to the murders altogether would be the justified reward. These sources however, do not show all the ways they tried to catch Jack the Ripper; the police were very active, even though they didn't have many leads. From studying Jack the Ripper I have learnt that the police interrogated each and every single suspect thoroughly but each result turned out ...read more.

Judging by the sources, Jack the Ripper was a cruel and calculating murderer causing unrest amongst many and giving police a very bad name. Source A shows the effect that the Ripper had on the community and area, and also shows the 'excess of effort' he used which would continually puzzle the police. Source B displays the details of one of his brutal murders, Polly Nicholls, this source suggests that the Ripper was trained in doctoring because there were no 'meaningless cuts'. Source C is the report of the body of Elizabeth Stride, showing how Jack the Ripper focused on each detail. Source D is also useful to disagree with the statement above because it shows the vagueness of the description and how little they had to work on. Source E shows that the police should have been on guard more even though the 'informant' person could be made up, this agrees with the statement above. Source F shows a very ineffective method of the police, which was to publish a police leaflet and post it to people's accommodations, this supports the statement because it didn't come to much effect. Even though it technically wasn't the Police Force's fault he got away with it, the confusing part is the cover up of the chalked writing the Ripper left, had it stayed, there might've been a different outcome seeing as it was a piece of evidence that the Police needed vitally and perhaps the police wouldn't have been blamed so heavily and mount so much suspicion on themselves. ...read more.