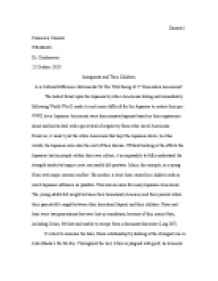 Japanese Americans. It is best to examine the Issei, Nesei relationship by looking at the strongest one in John Okadas No-No Boy

﻿Damato 1 Francesca Damato WR100-ES Dr. Kordonowy 22 October 2010 Immigrants and Their Children: Is a Cultural Difference Detrimental To The Well Being of 1st Generation Americans? The hatred thrust upon the Japanese by other Americans during and immediately following World War II made it much more difficult for the Japanese to restore their pre-WWII lives. Japanese Americans were discriminated against based on their appearance alone and had to deal with a great deal of negativity from other raced Americans. However, it wasn?t just the white Americans that kept the Japanese down. In other words, the Japanese were also the root of their demise. Without looking at the effects the Japanese had on people within their own culture, it is impossible to fully understand the strength needed to begin a new, successful life postwar. Ichiro, for example, is a young Nisei with major internal conflict. His mother, a strict Issei, raised her children with as much Japanese influence as possible. This was an issue for many Japanese Americans. The young adults felt caught between their homeland (America) and their parents while their parents felt caught between their homeland (Japan) ...read more.

The Japanese were Damato 4 so criticized solely on the basis of their ethnicity that they despised anyone within their community who proved the white Americans and U.S. government right; this leads Ichiro to feel a significant amount of guilt. ?Yes-Yes? and ?No-No? boys antagonized each other out of spite and hatred for those within their community and possibly for themselves as well. Okada depicts the Nisei as having a dominant discourse. They seem to be obsessed with who fought, who didn?t fight, and punishing those who didn?t fight. Therefore, it becomes very difficult for the Nisei generation to break out of their discourse when their peers have baggage of their own. It?s important to see that the culture divide between parents and children doesn?t only affect men old enough to fight. It most certainly has an influence on the younger generation as well. Take a close look at Taro, Ichiro?s younger brother. He comes across as heartless and angry at the world. He is headstrong and has made up his mind about entering the armed forces. In one intense moment, Taro decides to go in to the army, forever severing his relationship with his family when, ?He stood and looked down at Ichiro, wanting ...read more.

The divide between parents and children created a divide between cultures and ultimately, a divide between each Nisei him or herself. Japan-born parents tried their best to raise their American born children with Damato 7 Japanese morals and socio-culture. Unfortunately, doing so in an environment as strong as America?s led the Nisei to feel confused about who they were. Were they Americans because they enjoyed the same music, games, and dances as white teenagers or were they Japanese because they looked more Asian than they ever could white? This inner-confusion no doubt lived within the Nisei until it exploded during WWII when they were forced to prove themselves American. In No-No Boy this lack of identity the Issei developed within their children is the reason why the Nisei cannot break out of their dominant discourse when returning home from war and jail. Clearly, there was a lack of communication and understanding when looking at the relationship between Issei and Nisei during and after WWII. This communication failure can be a lesson learned for future generations in order to prevent a mass identity crisis within a specific age group. In modern day America however, embracing one?s own ethnicity is much more acceptable; therefore, it is safe to wonder if another Nisei/Issei situation could possibly happen again. ...read more.