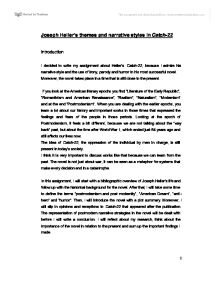 Joseph Heller's themes and narrative styles in Catch-22 Introduction I decided to write my assignment about Heller's Catch-22, because I admire his narrative style and the use of irony, parody and humor in his most successful novel. Moreover, the novel takes place in a time that is still close to the present. If you look at the American literary epochs you find "Literature of the Early Republic", "Romanticism and American Renaissance", "Realism", "Naturalism", "Modernism" and at the end "Postmodernism". When you are dealing with the earlier epochs, you learn a lot about our history and important works in those times that expressed the feelings and fears of the people in those periods. Looking at the epoch of Postmodernism, it feels a bit different, because we are not talking about the "way back" past, but about the time after World War II, which ended just 64 years ago and still affects our lives now. The idea of Catch-22, the oppression of the individual by men in charge, is still present in today's society. I think it is very important to discuss works like that because we can learn from the past. The novel is not just about war, it can be seen as a metaphor for systems that make every decision end in a catastrophe. In this assignment, I will start with a bibliographic overview of Joseph Heller's life and follow up with the historical background for the novel. After that, I will take some time to define the terms "postmodernism and post modernity", "American Dream", "anti-hero" and "humor". Then, I will introduce the novel with a plot summary. Moreover, I will slip in opinions and receptions to Catch-22 that appeared after the publication. The representation of postmodern narrative strategies in the novel will be dealt with before I will write a conclusion. I will reflect about my research, think about the importance of the novel in relation to the present and sum up the important findings I made. ...read more.

10 An emphatic version of explanation is given by Thomas Hobbes who suggests that "laughter is nothing else but sudden glory arising from some sudden conception of some eminency in ourselves, by comparison with the infirmity of others [...]." (Internet encyclopedia of philosophy) > Inferiority Theory In opposite to the superior theory Robert Solomon develops an "inferiority theory" of humor and says that feelings of superiority are not a necessary condition of humor. He describes the "self-recognition in the silly antics" and the comparison of "our current with our former selves [...] as a source of virtuous modesty and compassion." (Internet encyclopedia of philosophy) > Relief Theory The relief theory offered by Herbert Spencer and Sigmund Freud states that laughter results from a release of tension or energy. They describe humor as a tension-release model, but their explanation of it differs. In his strong version, Spencer speaks about a "theory of nervous energy" and in this case, "laughter can serve as the expressive route of various forms of nervous energy." (Internet encyclopedia of philosophy) In his opinion, nervous excitation needs a kind of physical movement. Sigmund Freud who assumes three different sources of laughter named joking, comic and humor gives a fine-grained version of the relief theory. In each case, the goal is to save psychic energy that had been wrongly produced by false expectations. "In joking, the energy that would have been used to repress s****l and hostile feelings is saved and can be released in laughter. In the comic, cognitive energy to be used to solve an intellectual challenge is left over [...].The humorous involves a saving of emotional energy [...]."(Internet encyclopedia of philosophy) > Incongruity Theory The incongruity theory traces back to Aristotle who leads his audience to laugh by setting up an expectation and then producing a surprise or a contrasting fact to the hearer. Kant says that only something absurd - and that could be the role of incongruity in humor - can evoke a sudden laugh. ...read more.

They are not on the front lines sacrificing their lives." (Vasatka 2009) They are the ones who do not have to be afraid, because they are secure while earning money. Postmodernist fiction questions the hierarchy and organization of the principles of our society through literature. This is exactly what Heller did: He questioned the social, economical and political condition of World War II, but still relates this to the present. At least, he claims that some transfers to present events can be made and I can agree with his statement. Unfortunately, injustice, sorrow and suffering are found in our modern society in many cases. Nevertheless, Heller's novel is especially a "clear-cut satire on contemporary American life." (Potts 1989: 115) It is very common for postmodernist works to treat serious topics in a humorous way and after looking at the text more closely, I can say that this is also accomplished in his novel. Along several funny scenes or black humor producing situations, the main concept of Heller's masterpiece is the irony of the "Catch-22" itself. The novel contains other postmodern features as well: There is an increase of uncertainty, because we do not know what will happen to Yossarian. Moreover, there is no real closure at the end of the book. Heller succeeds to use irony, sarcasm, black humor, the absurd and the tragic in one novel. Many characters create the feeling of polyphony; the reader gets information from all of them. In my opinion, Catch-22 is a very good example for a postmodern novel, because it keeps the typical conventions and expectations of a postmodern book. Besides, it is worth reading. In fact, Catch-22 is seen "as one of the first and most original creations of literary postmodernism and as an artefact of the social and political culture of the sixties, it is still regarded by many as the best novel of the decade." (Potts 1989: 8) Thus let me just add to this that I believe another reason for its popularity must exist: because we still live in the world of Catch-22. ...read more.