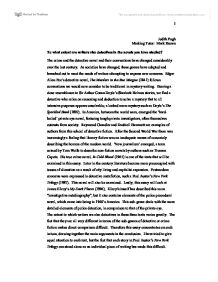 Judith PughMarking Tutor: Mark Brown To what extent are writers also detectives in the novels you have studied?

Judith Pugh Marking Tutor: Mark Brown To what extent are writers also detectives in the novels you have studied? The crime and the detective novel and their conventions have changed considerably over the last century. As societies have changed, these genres have adapted and branched out to meet the needs of writers attempting to express new concerns. Edgar Allen Poe's detective novel, The Murders in the Rue Morgue (1841) follows conventions we would now consider to be traditional in mystery writing. Bearing a close resemblance to Sir Arthur Conan Doyle's Sherlock Holmes stories, we find a detective who relies on reasoning and deduction to solve a mystery that to all intensive purposes appears unsolvable; a locked room mystery such as Doyle's The Speckled Band (1892). In America, between the world wars, emerged the 'hard-boiled' private eye novel, featuring tough private investigators, often themselves outcasts from society. Raymond Chandler and Dashiell Hammett are examples of authors from this school of detective fiction. After the Second World War there was increasingly a feeling that literary fiction was an inadequate means of accurately describing the horrors of the modern world. 'New journalism' emerged, a term coined by Tom Wolfe to describe non-fiction novels by authors such as Truman Capote. His true crime novel, In Cold Blood (1965) is one of the texts that will be examined in this essay. Later in the century literature became more preoccupied with issues of alienation as a result of city living and capitalist expansion. Postmodern concerns were expressed in detective metafiction, such a Paul Auster's New York Trilogy (1987). This novel will also be examined. Lastly, this essay will look at James Ellroy's My Dark Places (1996). Ellroy himself has described this as an "investigative autobiography", but it also contains elements of the police procedural novel, which came into being in 1940's America. This sub-genre deals with the more detailed elements of police detection, in comparison to that of the private eye. ...read more.

The distinction for Capote is that to be a good creative journalist a writer must have experience in writing fiction so that he has the necessary knowledge of fictional writing techniques. Writers trained in journalism for example would not possess the skills needed to write a creative journalistic piece, but are more suited to writing documentary novels. Capote's distinction is relevant to the question because it gives us an insight into the extent in which In Cold Blood was created as a compelling true crime novel, largely based on fact (by a writer), in comparison to the extent in which a crime and it's effects was accurately reconstructed and completely based on fact (as a detective would attempt to do). In order to determine the real extent to which Capote as author of this novel was also a detective a number of issues need to be addressed. To begin with the opinion that in researching and writing In Cold Blood Capote was in fact acting as a detective will be examined. The research Capote undertook in writing this non-fiction novel was indeed extremely thorough. He arrived in Holcomb in November 1959, the same month of the murders and a month before d**k Hickock and Perry Smith were arrested. He was therefore present during the time in which the initial police investigation was taking place. He conducted hundreds of interviews with residents of Holcomb, and other individuals who had come into contact with the two murderers. Some of these interviews, as he told George Plimpton in an interview for the New York Times in 1966, went on for three years. Capote also undertook "months of comparative research on murder, murderers, the criminal mentality," as well as interviewing, "quite a number of murderers" in order to gain a perspective on Smith and Perry10. In his interviewing of Smith and Perry after their arrest, he acted to a great extent as a detective is expected to. ...read more.

could also add credence to this idea. This is because as a self-consciously literary exercise, rather than accurate detection, In Cold Blood manages to create a sense of suspense even though the reader knows who has been killed and who committed the crime. Ellroy instead recounts facts as they were rather than attempting to satisfy readers' expectations. Conversely, if we are talking about conventional detective literature, we could say that Ellroy is less of a detective (in the traditional manner) for the very reason that he fails to solve the crime, thereby failing to restore social order. The final section, 'Geneva Hilliker', is that in which Ellroy is most evidently a detective as well as writer. This section of the novel details Ellroy's own investigation. It follows his collation of evidence, false leads followed and the final (if unsatisfying) resolution to Ellroy's story. Even if the reader does not find out who killed Geneva Hilliker, they, as Ellroy does, find out about her and her life. For Ellroy this provides some closure, as we would expect from a crime novel. It is not conventional to the genre but does resolve some of the questions Ellroy hoped to answer when he embarked on the investigation, thus consolidating his position as detective (however temporarily). In each of these novels, writers have to a considerable extent also been detectives. It is difficult to determine whether this is truer in any of the texts than in the others due to the different ways in which this has been the case. In My Dark Places and In Cold Blood, the authors of the novels have also carried out acts of detection in the research carried out for those novels. In New York Trilogy we see characters that happen to be either writers or detectives exchanging these roles. It may be said that any author is to some extent a detective, whether they are researching a factual book, or writing a fictional novel in order to discover something about the world in which they live. As Quinn believes, "the writer and detective are interchangeable"21. ...read more.