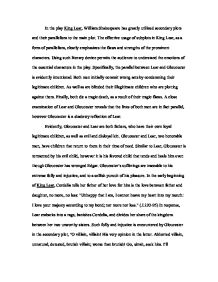 In the play King Lear, William Shakespeare has greatly utilized secondary plots and their parallelism to the main plot. The effective usage of subplots in King Lear, as a form of parallelism, clearly emphasizes the flaws and strengths of the prominent characters. Using such literary device permits the audience to understand the emotions of the essential characters in the play. Specifically, the parallel between Lear and Gloucester is evidently intentional. Both men initially commit wrong acts by condemning their legitimate children. As well as are blinded their illegitimate children who are plotting against them. Finally, both die a tragic death, as a result of their tragic flaws. A close examination of Lear and Gloucester reveals that the lives of both men are in fact parallel, however Gloucester is a shadowy reflection of Lear. Evidently, Gloucester and Lear are both fathers, who have their own loyal legitimate children, as well as evil and disloyal kin. Gloucester and Lear, two honorable men, have children that return to them in their time of need. ...read more.

The absurd scheme conducted by these evil characters in both plots also displays the parallel betrayal in King Lear. After Lear segregates his power to his two elder daughters, Regan and Goneril, Lear becomes powerless and fearless in the eyes of both daughters. Immediately after the division of power, both Regan and Goneril intend to reduce their father's remaining authority so that Albion will be under their control "Pray you, let's hit together; If our father carry authority with such disposition as he bears, This last surrender of his will but offend us." (I.i.306-309) Similar to the sisters' plan, Edmund also decides to inherit all of Gloucester's power, and thus plots Edgar's forged letter with orders to kill his father. After Gloucester departs giving orders for Edmund to find Edgar, Edmund boasts of his trickery of Gloucester and Edgar "That he suspects none; on whose foolish honesty my practices ride easy. I see the business. Let me, if not by birth, have lands by wit. ...read more.

I would have made them skip: I am old now, and these same crosses spoil me. Who are you? Mine eyes are not o' th' best: I'll tell you straight."(V.iii.277-282) Both deaths are very similar, however Lear and Gloucester die as courageous and wiser men than they showed themselves at first. Great parallelism was revealed as Shakespeare uses this literary device to entice and capture the heart of his audience at the end of the play. The close examination of Lear and Gloucester has revealed that the lives of both men are parallel. Both men initially committed wrong acts by condemning their legitimate children. Both then had their illegitimate children plot against them. Finally, both died a tragic death, as a result of their sins. This parallelism however emphasized the flaws of both characters, and allows the reader to more fully comprehend the mistakes that both men were making. It is clearly obvious that Gloucester is a shadowy reflection of King Lear. This resemblance of different plots and individuals in King Lear clearly embodies Shakespeare's flawless use of parallelism and superb writing style, and makes the play as thought-provoking as it is. ...read more.