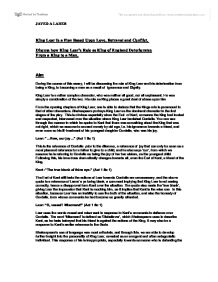 King Lear Is a Play Based Upon Love, Betrayal and Conflict. Discuss how King Lear&amp;#146;s Role as King of England Deteriorates

King Lear Is a Play Based Upon Love, Betrayal and Conflict. Discuss how King Lear's Role as King of England Deteriorates From a King to a Man. Aim During the course of this essay, I will be discussing the role of King Lear and his deterioration from being a King, to becoming a man as a result of Ignorance and Dignity. King Lear is a rather complex character, who was neither all good, nor all unpleasant. He was simply a combination of the two. His role as King places a great deal of stress upon him From the opening chapters of King Lear, one is able to deduce that the Kings role is paramount to that of other characters. Shakespeare portrays King Lear as the dominant character in the first stages of the play. This is obvious especially when the Earl of Kent, someone the King had trusted and respected, intervened over the situation where King Lear banished Cordelia. You can see through the manner in which he spoke to Kent that there was something about the King that was not right, which we assume is caused merely by old age, i.e. his ignorance towards a friend, and even more so his ill-treatment of his youngest daughter Cordelia, who was his joy. Lear: "...Now, our joy..." (Act 1 Sc 1) This is the reference of Cordelia prior to the dilemma, a reference of joy that can only be seen as a most pleasant reference for a father to give to a child, and he also says 'our', from which we assume he is referring to Cordelia as being the joy of her two sisters, as the youngest child. ...read more.

We also sympathise with Cordelia, as we are able to see her innocence, which Lear cannot, and it is because of this humble and genuine character of Cordelias, that we feel kind-hearted towards her ill treatment. Cordelia: "So young, my Lord, and true". This quote has been extracted to show Cordelia's loyalty, and honesty which she has stated in response to Lears comment, who said she was young and untender. It is also due to Cordelia not having been married, which is another great concern for Lear, who fears the worst for her, especially if his life were to draw to an end. Cordelias' sisters are happily married to their husbands, hence Regan to the Duke of Cornwall, and Goneril to the Duke of Albany. From Cordelia's response, we see a humble personality who is honest and loving. It seems her approach is to Love, and be Silent, in contrast to her sisters, with Cordelia feeling empathy towards the well being of her father. Cordelia is also concerned over the action of her sisters, and feels their hearts were from the lips to deceive their father, which they used to deliver such flattering speeches, which drew such extravagant rewards. Cordelia as the youngest child we assume has had the most attention due to her living with her father, with King Lear as the only guider, which one assumes as there is no mention of her mother during the course of the play. Lear also compares her to her sisters who during the beginning stages of the play are crafty in their approach to convince Lear they truly love him, even more so than their husbands, and from this, Cordelia later made an extremely impressive point stating clearly that if she were to have been married, half of her love would be for her husband. ...read more.

From this quote, we notice he has mentioned the word 'Man', which is what he refers to himself as, in contrast to the prior attitude of King Lear. He also refers to Cordelia as his Child, which is also quite significant as she is matured, a woman, and his reference to her as his 'child' has shown Lear has overcome his ignorance and that he accepts his daughter back so long as she accepts him, of which the love is in abundance. King Lear has learnt to forgive, a proceeding he was previously unable to do. Lear: "Pray you now, forget and forgive: I am old and foolish" Here, he has accepted his guilt, and is able to love his daughter for her true genuine character, which she retained from the time of her banishment. He has accepted his mistake and as a father, he repents against his actions as King, and has recognised the significance of the whole situation. As a concluding statement, we are able to see that King Lear had developed himself from an ignorant self-centred King, to a Man. He faced many experiences during the course of his life. This was a result of Love, which he gained at the end, the Betrayal he faced from his daughters Regan and Goneril, and the conflict he had with other characters in this magnificently structured play, by Shakespeare. King Lear's life ended in tragedy, but it is the achievement of King Lear's reconciliation with his daughter Cordelia, and also his realisation of the treachery of his other two daughters, which I so greatly commend. ?? ?? ?? ?? JAVED-A LAHER ...read more.