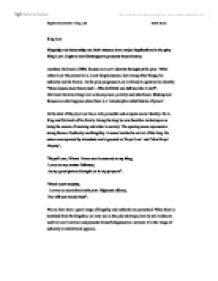 Kingship and leadership and their absence have major implications in the play King Lear. Explore how Shakespeare presents these themes.

King Lear Kingship and leadership and their absence have major implications in the play King Lear. Explore how Shakespeare presents these themes. Jonathon Dollimore (1984) focuses on Lear's identity throughout the play. 'What makes Lear the person he is, is not kingly essence, but among other things, his authority and his family. As the play progresses Lear is forced to question his identity. "Does anyone hear know me?...Who is it that can tell me who I am?". Dollimore believes King Lear is about power, poverty and inheritance. Shakespeare focuses on what happens when there is a 'catastrophic redistribution of power'. At the start of the play Lear has a rich, powerful and complex social identity. He is King and Patriarch of his family. Being the king he was therefore looked upon as being the source of meaning and order in society. The opening scene represents a strong theme of authority and kingship. A sennet marks the arrival of the king. He enters accompanied by attendants and is greeted as 'Royal Lear' and 'Most Royal Majesty'; "Royal Lear, Whom I have ever honoured as my king, Loved as my master followed, As my great patron thought on in my prayers". "Most royal majesty, I crave no more than hath your Highness offered, Nor will you tender less". We see here how a great image of kingship and authority are presented. When Kent is banished from the kingdom, we later see as the play develops, how he still wishes to work in Lear's service and presents himself disguised as a servant. ...read more.

Dry up the organs of increase!" Lear wishing this upon his own daughter shows the extent to which he wanted to keep his identity and recognition as king but he just wants to pass on the actual responsibilities. At this point Lear realizes his loss of power and authority and leaves to seek shelter in a storm. Kingship and authority are closely connected to the natural law, another central theme in the play. A successful king works with nature. Lear represents natural order until he fails to recognise Cordelia's genuine love for him and he banishes her from the Kingdom calling her "a wretch whom nature is ashamed, almost t'acknowledge hers". It is this action and Lear's many other foolish decisions which a picture of Lear as being a poor model of kingship. He creates political and social chaos among the kingdom. Symbolism of material things contributes to how kingship and authority are represented in the play. For example, in the first scene when Lear is dividing up his land, power and authority to his three daughters depending on how much they can verbally express their love for him; "Which of you shall say doth love the most? That we our largest bounty may extend where nature doth with merit challenge." The land that each daughter received is the extent of their authority and their power in the kingdom. For example, the Duke of Burgundy did not wish to marry Cordelia after he found out she was getting no inheritance from her father. ...read more.

revealing he has the goodness and the strength to defeat evilness, a quality which a successful king must possess, unlike Lear who was blind to the hatred and evilness present within characters such as Goneril, Regan, Cornwall and Edmund, who offer a contrasting image of kingship in their evil and uncaring approach and behaviour. Edgar represents qualities common to kingship such as integrity, compassion and a sense of justice, things Lear once possessed but lost as a result of his downfall from his status of authority. In conclusion kingship and authority and the lack of it is quite evident among many characters in the play. These themes contribute to the main plot and also the outcome of the play. Those who had power and authority but lacked the qualities to use this power responsibility like Lear and Gloucester, suffered as a result but in the end they were aware of the error of their ways but realised only too late their mistakes. Characters such as Regan and Cordelia who tried too hard to gain power which they were naturally unworthy of also suffered because of their actions. Their desire to gain the responsibilities of king was so big that they eventually turned against each other, ultimately leading to each of their deaths. Authority and kingship in the play are strong central themes and Shakespeare presents them in such a way that allows us to see what happens when there is a "catastrophic redistribution of power". ?? ?? ?? ?? English Coursework - King Lear Sarah Burns ...read more.