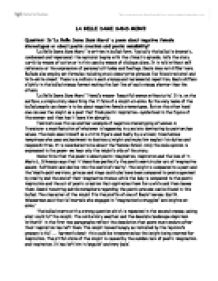 LA BELLE DAME SANS MERCI Question: Is 'La Belle Dame Sans Merci' a poem about negative female stereotypes or about poetic creation and poetic sensibility? 'La Belle Dame Sans Merci' is written in ballad form. Typically the ballad is dramatic, condensed and impersonal: the narrator begins with the climactic episode, tells the story curtly by means of action or in this case by means of dialogue alone. It is told without self reference or the expression of personal attitudes and feelings. Keats does not differ here. Ballads also employ set formulas including stock descriptive phrases like 'blood-red wine' and 'milk-white steed'. There is a refrain in each stanza and incremental repetition. Keats differs slightly in the ballad stanza format making the last line of each stanza shorter than the others. 'La Belle Dame Sans Merci' literally means- 'beautiful woman without pity'. It is, on the surface, a simple story describing the ill fate of a knight-at-arms. By the very name of the ballad people can deem is to be about negative female stereotypes. ...read more.

The cold wintry weather and the desolate landscape depicted- 'wither'd'- in the first two paragraphs reflect the desolation that poets must endure after their inspiration has left them. The knight looked hungry as indicated by the 'squirrel's granary is full . . . harvest's done'- this could be interpreted as the knight being starved for inspiration. The pitiful state of the knight is caused by the sudden lack of poetic imagination and inspiration. It has left him in 'anguish' and very 'pale'. 'wild eyes' and long hair are said to be two physical characteristics of Keats' muses, by D'Avanzo. The 'wild eyes' could also refer to the untameable energy of imagination. The woman is said to be 'full beautiful' as well as being strong and wild, this suggests ambiguity as seen in imagination. By placing her on his 'steed' he tries to control and tame her which is in vain. The woman is called a 'fairy's child' and is said to sing a 'faery's song'; this elfin nature is another association with poetic imagination. ...read more.

The language was 'strange' also because she was a magical creature- a 'fairy's child'. Her 'elfin grot' could be a metaphor for a sanctuary of imagination and poetry. Poetic inspiration and imagination come to a peak at the grot. There is no indication that the woman wilfully banished the knight from her 'elfin grot' and it has been argued that the union of the lovers is broken by the knights own inability to retain the vision. When she 'wept' it is another indicator that the fantasy would end. He dreams of a cold hillside and a bleak countryside. This abrupt transition is characteristic of ballads. This dream indicates the death of imagination and the return of the knight to numbing reality. He hears the past victims of the Lady who had nourished him and then mercilessly takes away her gifts. She destroys all those that go in search of her; of imagination and inspiration. The knight is left unfulfilled and with pain. Keats suggests that imagination too has its inevitable and natural decline. Either interpretation can be maintained; the poem brings together both points of view as it mirrors the conflict in Keats' own mind. No. of words: 1062 ...read more.

Analysis of KeatsÃ¢â‚¬â„¢ To Autumn