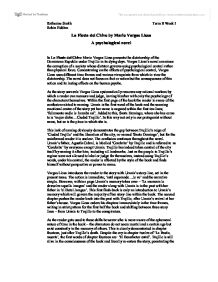 La Fiesta del Chivo by Mario Vargas Llosa A psychological novel In La Fiesta del Chivo Mario Vargas Llosa presents the dictatorship of the Dominican Republic under Trujillo in its dying days. Vargas Llosa's novel examines the corruption of a society whose dictator governs using psychological control rather than physical force. Concentrating on the affects of psychological control, Vargas Llosa uses different time frames and various viewpoints from which to view the dictatorship. The novel does not focus on fact or action but the consequences of this action and its lasting effects on the human psyche. As the story unravels Vargas Llosa systematically removes any rational markers by which a reader can measure and judge, leaving him/her with only the psychology of the characters themselves. Within the first page of the book the reader is aware of the confusion related to naming. Urania is the first word of the book and the seeming emotional centre of the story yet her name is negated within the first ten lines; 'felizmente nadie le llamaba as�'. Added to this, Santa Domingo, where she has come to is 'mejor dicho...Ciudad Trujillo'. ...read more.

In this way Vargas Llosa takes away the emphasis from action and places it more on the results of this action in the minds of the people they affect; both the lasting and short-lived reactions. This importance on psychology is signalled to the reader from the beginning with the vantage point from which Vargas Llosa starts his story - from the future and from a place in which the important events of the story have already happened. The main events of the story repeat themselves without respite in the narrative, related from different viewpoints. From his first chapter Trujillo is violently angry at the thought of 'la flaquita' and 'la muchachita esqueleto', the girl who has made his worst fears of impotency and sexual failure a reality. The memory constantly invades his thoughts and mind and shows his obsession with physical prowess in relation to power and his ability as dictator. Urania however remembers the same scene very differently, her rape being the cause of her return to Ciudad Trujillo and thirty years of remembering and suffering. Although the references to Urania's rape occur within the first two chapters of the book, the actual event provides a climax and end to the ...read more.

Urania is dominated by her father's betrayal and the way in which he sacrificed her to Trujillo. Trujillo is obsessed with his physical power and his frustration at his prostate cancer - his lack of control concerning urination and ejaculation angers and shames him. These obsessions form the flash-backs in the characters' narrations and unite the characters rather than separating them as people with different tragedies and torments. Merging both story-lines, characters and time-frames, Vargas Llosa creates a time, a place and a people who remain static in the novel, despite the passage of time and events that follow the dictatorship. By using Urania Cabral as a vehicle in which to involve the reader psychologically and emotionally in the story from the first chapter, Vargas Llosa places memory as the governing force in the novel. He examines Urania's suffering and thoughts, in which Trujillo is still alive, the city 'mejor dicho' Ciudad Trujillo and her pain still present after the gap of thirty years. Urania however is only a symbol of the masses. Vargas Llosa does not write a story chiefly about characters and events but rather removes the labels of person, time and place to show the psychology of the Dominican republic as a whole under Trujillo. Katherine Smith Term II Week I Robin Fiddian ...read more.