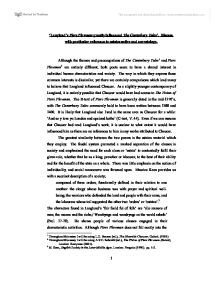 'Langland's Piers Plowman greatly influenced The Canterbury Tales'. Discuss, with particular reference to estates satire and narratology. Although the themes and preoccupations of The Canterbury Tales1 and Piers Plowman2 are entirely different, both poets seem to have a shared interest in individual human characteristics and variety. The way in which they express these common interests is dissimilar, yet there are certainly comparisons which lead many to believe that Langland influenced Chaucer. As a slightly younger contemporary of Langland, it is entirely possible that Chaucer would have had access to The Vision of Piers Plowman. The B-text of Piers Plowman is generally dated in the mid-1370's, with The Canterbury Tales commonly held to have been written between 1388 and 1400. It is likely that Langland also lived in the same area as Chaucer for a while: 'And so y leve yn London and opelond bothe' (C-text, V. 44). Even if we can assume that Chaucer had read Langland's work, it is unclear to what extent it would have influenced him as there are no references to him in any works attributed to Chaucer. The greatest similarity between the two poems is the estates material which they employ. The feudal system promoted a marked separation of the classes in society and emphasised the need for each class or 'estate' to contentedly fulfil their given role, whether that be as a king, preacher or labourer, to the best of their ability and for the benefit of the state as a whole. There was little emphasis on the notion of individuality, and social manoeuvre was frowned upon. Maurice Keen provides us with a succinct description of a society; composed of three orders, functionally defined in their relation to one another: the clergy whose business was with prayer and spiritual well-being; the warriors who defended the land and people with their arms; and the labourers whose toil supported the other two 'orders' or 'estates'.3 The characters found in Langland's 'fair feeld ful of folk' are 'alle manere of men, the meene and the riche,/ Werchynge and wandrynge as the world asketh' (Prol. ...read more.

1791-2). It is obvious that the clergy were responsible for people's understanding of the bible and it seems that it was possible for them to use this to their financial advantage. The portrayal of women is a contentious issue in these two works. The women are seen in roles which are representative of their estates (which were defined in terms of the class of their husband). Piers, when setting out tasks for everyone, sets the women to sewing and spinning wool (VI. 9-16). We are again presented with the idea of right behaviour within one's estate. Chaucer provides us with a wider selection, and fuller description, of women than Langland, but they seem to be unreal stereotypes placed amongst the pilgrims as representatives of the estate of women. The women are employed in the same way as the men in the tales; we are faced with the ideal figures, such as the overtly virtuous wife Griselde, and those who fulfil all the negative stereotypes of their estate, like the bawdy and outspoken Wife of Bath. These represent the religious woman and the secular woman. It has been noted that it would be unlikely to find any women involved in a pilgrimage, which emphasises the case for both poems being preoccupied with estates rather than just the portrayal of random figures to tell their stories. The anti-friar and anti-feminist material, however, does not really link these two pieces of writing as they were very popular themes in most contemporary writing and the poets themselves were likely to have encountered these types of characters. Neither Chaucer nor Langland offers any solution to the problems of dishonest friars or promiscuous women. Other than the characters which are common to both Chaucer and Langland (which generally appear to have been stock social or literary figures of the time), their concern for outward appearance is clear through their physical descriptions of characters. ...read more.

Although both poets deal with the subject of religion (which was unavoidable in this society), they avoid extended clerical allegory, which suggests that human conflict was of higher importance to them, especially the plight of the over-worked peasants. They are dealing with human relationships in the accessible vernacular. This shows the target audiences were not clerks or scholars, but literate laymen. It is interesting that the leaders of the pilgrimage are non-ecclesiastical. This, again could have been to empower the peasant audience and make them able to relate to the stories. Harry Bailey is a secular figure who happens to be leading the pilgrimage. Through him Chaucer acts as a poet and as a story-telling pilgrim. This idea of a narrator both external to the poem and yet acting as a character in the work is quite unusual. The dreamer in Piers Plowman is used to much the same effect. George Kane claims that 'dream-vision poems are by their nature personal poems. They take the form of reports by a first person narrator who professes to have himself experienced the dream he recounts.'12 Although the dreamer shares his identity with the author, they have different modes of existence. The things which happen to the narrator could not happen to the author, and this creates ambiguity for the audience. It would be easier to express a point of view through the use of a fictional character than to outrightly express the view as one's own. These verbal games show the progression of the use of the first person 'I' from the impersonal and dramatic 'I' of Anglo-Saxon, to the semi-personal 'I' of the Renaissance. The Dreamer and Harry Bailey both offer us insights into the poets' minds, although Chaucer's function is for irony (when he forgets details or tells a bad story) and Langland uses it for serious meditation. This is merely indicative of Chaucer's fairly secular commentary, laughing with the pilgrims at their unfortunate lots, and Langland's deeply religious piece, which is a quest for reform or at least contentment. ...read more.