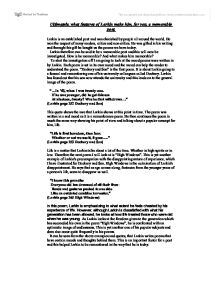 Larkin is an established poet and was cherished by people all around the world. He won the respect of many readers, critics and non-critics. He was gifted in his writing and through this gift he bought us the poems we have today. Larkin therefore can be said to be a memorable poet and this will now be investigated. How is he memorable? And what makes him memorable? To start the investigation off I am going to look at the mood poems were written in by Larkin. Each poem is set in its own mood and the mood can help the reader to understand the poem. "Dockery and Son" is the first poem. It is about Larkin going to a funeral and remembering one of his university colleagues called Dockery. Larkin has found out that his son now attends the university and this leads on to the general image of the poem. "...In '43, when I was twenty-one. If he was younger, did he get this son At nineteen, twenty? Was he that withdrawn..." (Larkin page 152 Dockery and Son) ...read more.

As Larkin looks at the freedom given to the generation which has succeeded his own in the poem "High Windows", he is confronted with an optimistic image of endlessness. This is yet another one of his popular subjects and does also occur quite frequently in his poems. It can be seen from the above examples and quotes, that Larkin writes poems that have certain moods and thoughts behind them. This is an important factor for a poet and this helped Larkin to be remembered in the way that he is today. Another matter that could help to see why Larkin is such a memorable poet is whether or not he is arrogant in his poems. Some say that he is and others disagree. Hence I will investigate another few poems to see if he is or is not. The poem I am going to look at to start this part off is "The View". This is a poem looking on life from the elderly person's point of view. Larkin says in this poem that life doesn't turn out to be what you expected when you were younger. ...read more.

In all I can say that Larkin is not an arrogant poet from the poem that I have read. I can say that sometimes, when he doesn't understand something, he might knock it down a little but does actually respect it. Finally I will look at if Larkin keeps his life hidden. In his poems he talks a lot about life events and things that are not fiction. He therefore brings his life into the poems that he writes but does not base the whole poem upon these happenings. From the quotes listed above, it is possible to say that life is an important factor in his poetry and it is because of the realism that is involved in his poems, that he is such a memorable poet. Larkin writes from different perspectives and he does so well. He will write a poem to reflect a mood or an experience that might occur in life. To write a poem on this is what forms the base of a real ingenious poet and Larkin is this in my opinion. Therefore I join in saying that Larkin is made a memorable poet and am happy to agree with that statement overall. ?? ?? ?? ?? Ultimately, what features of Larkin make him, for you, a memorable poet. ...read more.