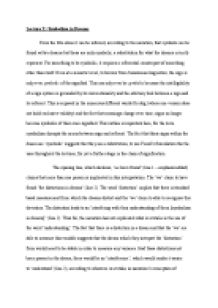 Lecture X: Symbolism in Dreams. Through a psychoanalytic framework, analyse any one of Freud's Introductory Lectures.

﻿Lecture X: Symbolism in Dreams From the title alone it can be inferred, according to the narration, that symbols can be found within dreams but these are only symbolic, a substitution for what the dreams actually represent. For something to be symbolic, it requires a referential counterpart of something other than itself. Even at a semiotic level, to borrow from Saussurean linguistics, the sign is only ever symbolic of the signified. This can only ever be symbolic because the intelligibility of a sign system is grounded by its conventionality and the arbitrary link between a sign and its referent. This is exposed in the numerous different words for dog (where one version does not hold exclusive validity) and the fact that meanings change over time; signs no longer become symbolic of their once signified. This outline is important here, for the term symbolism disrupts the nexus between sign and referent. The fact that these signs within the dream are ?symbolic? suggests that they are a substitution, to use Freud?s formulation that he uses throughout the lectures, for yet a further stage in the chain of signification. The opening line, which declares, ?we have found? (line 1 ? emphasis added) claims that more than one person is implicated in this interpretation. The ?we? claim to have found ?the distortions in dreams? (line 2). The word ?distortion? implies that there is standard basal measurement from which the dreams distort and the ?we? claim to able to recognise this deviation. The distortion leads to an ?interfering with their understanding of them [symbolism in dreams]? (line 2). Thus far, the narration has not explicated what is at stake in the use of the word ?understanding?. The fact that there is a distortion in a dream and that the ?we? are able to measure this variable suggests that the dream which they interpret the ?distortion? from would need to be stable in order to measure any variance. ...read more.

In the exceptional cases where ?nothing occurs to a person under analysis? (line 16), for this does not happen ?as often as he asserts? (line 18) , the ?associations? can ?fail to emerge? (line 20) or alternatively, they can still emerge, but the associations do not ?give us what we expected from it? (line 20). The word ?association? here, given that the formula for being ?in a position to understand dreams? was outlined earlier, is an association, or in this case a lack thereof, between the ?manifest dream? and the ?latent dream-thoughts? (line 11). Moreover, these associations can emerge but still not ?give us what we expected from it? (line 21), which suggests that there is an expectation from these ?associations?. The presence of an association does not indicate that an ?idea can be extracted? (line 19) from it. Accordingly, the result of the associations which do not meet the narration?s ?expectations? cause the narration to ?admit? (line 14), which implies that his ?technique? (line 14) does not work on everybody. For these associations to provide any understanding of the symbolism in dreams, or at least to be ?in a position to understand? dreams, there is a criteria which these associations need to meet, hence the ?expectations? that the narration holds. However, these associations do offer a ?peculiar significance? (line 22) in psychoanalytic treatment where they would be rendered insignificant here. This is a piece of information ?with which we are not here concerned (line 23), yet we are still told, for it offers a contrastive model to this ?technique? of analysing the symbolism in dreams. It could be argued that the psychoanalytic treatment is determined ?peculiar? because it is derived epiphenomenally ? a product of an altogether different intention, but it proves useful under a different protocol. Not only does this ?peculiar significance? happen in psycho-analytic treatment, but it also happens in the interpretation of ?normal? (line 24) ...read more.

The formulation ?be in a position? is echoed from earlier: ?we would still not be in a position to understand dreams? (line 10 emphasis added). These conditions do not provide an understanding, but merely the right foundation from which an interpretation can be made. The narration outlines what this foundation would require: ?if we are acquainted with the ordinary dream-symbols, the dreamer?s personality, the circumstances in which he lives and the impressions which preceded the occurrence of the dream? (line 80, 81). Despite the fact that the dreamer would be equally handicapped in his knowledge of the translation of the symbol in the ancient, popular and the narration?s interpretation, the ?interpretation based on a knowledge of symbols is not a technique which can replace or compete with the associative one? (line 89). Accordingly, the narration warns us to ?not be led astray by this [interpreting the dream at sight]? (line 87). The ?interpretation based on a knowledge of symbols? can enrich an associative protocol, for it is regarded as a ?supplement? (line 90) to such enquiry, but is not a valid technique in and of itself, as it can only ?yield results which are only of use when introduced into it? (line 91 emphasis added). The fact that it can only be subsumed ?into? it suggests that the associative model is the larger whole in which substituted. The narration argues that the content of a dream is contingent on the events of the previous day: ?as a rule familiar with the events of the previous day, which were the instigators of the dream? (line 96). The word instigators suggests that the events of the previous day play the causative role in the dream. Moreover, ?the associations of the person you are analysing? will provide you, with what the narration refers to as the ?psychical situation? (line 98), which we can deduce as being an integral part of the associative technique, for it is result of the ?associations of the person you are analysing? (line 97). ...read more.