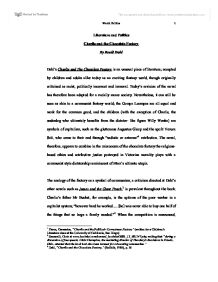 Literature and Politics - Charlie and the Chocolate Factory

Literature and Politics Charlie and the Chocolate Factory By Roald Dahl Dahl's Charlie and The Chocolate Factory is an unusual piece of literature; accepted by children and adults alike today as an exciting fantasy world, though originally criticised as r****t, politically incorrect and immoral. Today's revision of the novel has therefore been adapted for a racially aware society. Nevertheless, it can still be seen as akin to a communist fantasy world; the Oompa Loompas are all equal and work for the common good, and the children (with the exception of Charlie, the underdog who ultimately benefits from the dictator- like figure w***y Wonka) are symbols of capitalism, such as the gluttonous Augustus Gloop and the spoilt Veruca Salt, who come to their end through "s******c or extreme"1 retribution. The novel, therefore, appears to combine in the microcosm of the chocolate factory the religious- based ethics and retributive justice portrayed in Victorian morality plays with a communist style dictatorship reminiscent of Marx's ultimate utopia. ...read more.

It's such a waste of precious time!"8 Furthermore, the chocolate factory is used as a metaphor for the corrupt communist system whose government holds monopolies over the people. For example, Grandpa Joe describes how "the chocolates... have become more fantastic and delicious.... [and nobody] else is able to copy it,"9 and later implies that the competition is merely a ploy to earn more money because "The whole world will be searching for those Golden Tickets.... He'll sell more than ever before!"10 Though this is a criticism of corrupt communist systems, however, in reality it is a feature of capitalist systems with companies such as Microsoft accused of having monopolies over computer systems, and media 'moguls' such as Rupert Murdoch in effect controlling freedom of speech. Additionally, his treatment of the Oompa- Loompas is questionable. This is particularly true of the original version of Charlie and the Chocolate factory which was criticised by writers such as Eleanor Cameron. Her primary concern was the Oompa- Loompas, who were originally African Pygmies working for a wage of cacao beans, singing songs akin to war chants, and allowing themselves to be experimented on "like laboratory animals" by Wonka. ...read more.

Therefore the treatment of Dahl's novel is akin to what Jeremy Clarkson bemoans about today's society- that it is too politically correct; for example calling Siamese twins "conjoined twins."17 It is possible to read Charlie and the Chocolate Factory as a Victorian morality play not only in setting with the "great iron gates"18 and huge chimneys reminiscent of an English factory during the Industrial Revolution, but also in message with Wonka summing up the "moral" of the story in the final few pages, telling Charlie that "I want a good sensible loving child."19 It is also possible to see is as an analogy of a corrupt communist dictatorship with the "evil" dictator gradually disposing of those he dislikes; thereby bringing relevance by comparison with today's international politics. Though it is interesting to read subtleties such as these into the plot, however, it is likely that it is possible to read them into any fictional novel. I would prefer to continue to read it as a magical novel that inspired my imagination from childhood onwards, written with no r****t malice or cruel intent. ...read more.