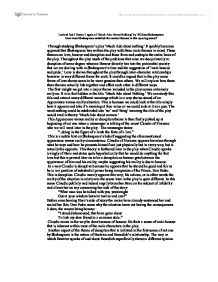 Look at Act 1 Scene 1 again of 'Much Ado About Nothing' by William Shakespeare. How does Shakespeare establish the central themes in this opening scene?

Look at Act 1 Scene 1 again of 'Much Ado About Nothing' by William Shakespeare. How does Shakespeare establish the central themes in this opening scene? Through studying Shakespeare's play 'Much Ado about nothing' It quickly becomes apparent that Shakespeare has written the play with three main themes in mind. These themes are love, honour and deception and these form and underpin the entire basis of the play. Throughout the play much of the problems that arise are due primarily to deception of some degree whereas Honour directly ties into the patriarchal society that we are dealing with in Shakespeare's time and the suggestion of 'male honour and pride.' Love is shown throughout the play through inter-character relationships however in very different forms for each. It could be argued that in the play some forms of love shown seam to be more genuine than others. We will explore how these three themes actually link together and affect each other in different ways. The first insight we get into a major theme included in the play comes extremely early on. It is in fact hidden in the title 'Much Ado about Nothing.' We can study this title and extract many different meanings which in a way shows strand of an Appearance versus reality situation. This is because we could look at the title simply how it appears and take it's meaning at face value or we could look at it as a pun. ...read more.

"I will have a recheat winded in my forehead, or hang my bugle in an invisible baldrick, all women shall pardon me. Because I will not do them the wrong to mistrust any, I will do myself the right to trust none." This is the first suggestion we get at the topic of cuckolds which is a continued imagery throughout Benedick's character. In this speech made by Benedick he shows an insecurity and fear of perhaps becoming cuckolded and he feels that by being with a women he will be unable to trust them fully not to be unfaithful and therefore he feels that he does not want to do women this kind of wrong. This fact enhances the romance of the play when Benedick finally gives in to love with Beatrice which displays the attitude that love is not logical. Don Pedro also adds to the irony of Benedick's declaration that he will never love a woman: "I shall see thee, ere I die, look pale with love" This anticipates the ultimate fate of Benedick himself. Benedick furthers this irony by progressing into saying in reply of Don Pedro: "With anger, with sickness, or with hunger, my lord, not with love. After additional exchange between the two men, Don Pedro refers back to the imagery of cuckolding: "Well as time shall try: 'In time the savage bull doth bear the yoke.'" Benedick then cleverly returns that the savage bull Don Pedro talks about may bear the yoke meaning participate in the act ...read more.

If we study Claudio's words he speaks of how he used to like her when he saw her before but he had to put himself in a soldiers frame of mind, in that which had other priorities not of love but of honour and war. He uses hard and soldier kinds of words: "That liked but had a rougher task in hand Than to drive liking to the name of love.." Drive is a very hard and rough word reminiscent of a rough hard soldier's frame of mind. However as he starts to talk about the frame of mind he can indulge in now, that frame of mind being one of love he starts to use much softer words and imagery: Come thronging in soft and delicate desires, All prompting me how fair young Hero is.." Thronging and soft are both very soft and romantic words as is delicate. Shakespeare also uses an alliteration of the soft 'd' sound in delicate and desires. When Don Pedro speaks he tells Claudio of how he will be able to woo her for him, being in a more powerful and influential position. The main point is when Don Pedro states: "And thou shalt have her." This indicates that firstly as they are men, they have power over the women in any case and secondly because they are in powerful positions and Leonato, Hero's father basically will dictate what Hero must do, that Hero will have no choice whether she takes Claudio or not. In conclusion we can note all themes that appear throughout the play are each established substantially in the opening scene. ...read more.