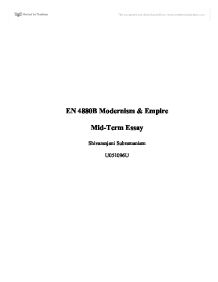 Lord Jim,appearing just at the turn of century, can be easily glossed over, due to the novel’s maritime backdrop, as belonging to travel literature that was popular in fin de siècle England. However upon delving deeper, the novel’s modernism manifested through aspects like the different viewpoints and as such a fragmented story, its self-reflexivity and the poetic nature of the prose, rescues the novel from such a quick and unjust gloss (Klages 165). For the novel does not glorify the journeys that the West undertook in the late nineteenth century in the name of exploration or the Empire- it rather, through its modernist aesthetics, undermines them. Keeping in mind how late nineteenth century literature on the empire “was effectively a literary and visual form of pro-imperial propaganda”, Lord Jim makes a clean break from that genre preciselybecause Conrad juxtaposes colonialism and modernism (Levine 121). Considering what the abovementioned modernist aesthetics comment upon colonialism and how colonialism itself is complicated in the text, this paper will show how Lord Jim avoids being labeled as pro-imperial propagandistic literature.

Modernism actually does not just comment upon colonialism- it approaches the latter in a whole new way. The binarism or Manicheanism that normally holds colonialism in place and even justifies it, collapses in the face of modernism because the aesthetics of modernism allow it to present not one universal way of looking at the colonized subjects or colonial journeys, but rather a multitude of ways.

An aspect of modernism which is outstanding in Lord Jim is the fragmentary nature of the story. Seen from different points of view, including an omniscient narrator in the first four chapters, the novel offers as such, different takes on colonialism. The typical Manichean way of approaching the Other is epitomized by the omniscient narrator, as we are introduced to the pilgrims first through his omniscient standpoint, wherein they are divest of individual consciousness and appear as one large group homogenized by their religious beliefs. The description of the pilgrims starts with “they streamed in urged by faith” and after seeming to giving credit to their religious conviction, the description ends by describing them as “unconscious pilgrims of an exacting belief”. The narrator thus not only reduces and ridicules their religion and, the extents to which they would go for it, but clearly displaces such faith as belonging outside Western space for the pilgrims were “coming from north and south and from the outskirts of the East”. They were, like the German skipper says, “cattle” and “human cargo” or body parts such as “a dark hand” or “a throat bared and stretched as if offering itself to the knife” for even their body parts suggested their vulnerability to the colonizer’s subjectivity.

But as the viewpoints change, so does the portrayal of the Other and in relation, the take on colonialism and the journeys undertaken in its name and alleged good cause. Some viewpoints, like Captain Brierly’s, are still reminiscent of the narrator in the first few chapters, for he likens the pilgrims to “old rags in bales”. It is in fact, Brierly’s viewpoint that exposes the artifice of the civilizing mission behind colonialism that it was not in service of the native but rather, self-serving in nature.

We must preserve professional decency…We are trusted…We aren’t an organized body of men, and the only thing that holds us together is just the name for that kind of decency

Their sense of duty as such does not extend to the natives but to themselves, and to the image they have carefully fashioned for themselves- as masters, as protectors, as brave men.

Viewpoints like Marlow’s and Stein’s similarly shed new light on the matter of colonialism. The religion which is scoffed at by the omniscient narrator is validated by Marlow who suggests that

It was as if the Omnipotence whose mercy they confessed had needed their humble testimony on earth for a while longer, and had looked down on make a sign, ‘Thou shalt not!’ to the ocean.

Though in the end, Marlow attributes the ship’s ability to float to “tough old iron”, his suggestion temporarily confounds the secularity of the Western thought. After all, the pilgrims too had placed their trust in “the wisdom of the white men”, “their courage”, “the power of their disbelief” and “the iron shell of their fire-ship” - three components of the White man’s power had failed them so why would a product of that power withstand the squall if not for divine intervention? Marlow’s speculation thus forces the Western mind to consider this other possibility.

Stein’s remark made to Marlow as why to Man was not a masterpiece not only reveals his viewpoint but also poetically sums up Man’s flaw:

Sometimes it seems to that man is come where he is not wanted, where there is no place for him; for if not, why should he want all the place?

The flip side of the colonial enterprise is exposed through this viewpoint as it fleshes out greed as being the driving force behind colonial journeys and pits colonialism’s unwelcomed intrusive nature against its civilizing mission.

However, it is not simply a case of approaching colonialism from different viewpoints. What is modernism inherently trying to do with colonialism? Why did Conrad not simply, if he was trying to be sympathetic to the other side, posit one firm way to look at colonialism? Paul Kintzele puts forth the claim that “Lord Jim pushesthe reader to choose, to make a judgment” and this paper contends, there is truth to this statement. For therein lies the spirit of modernism and the novel’s spectrum of viewpoints to approach colonialism- it begs the reader to choose wisely which viewpoint to align oneself to. It does not dictate a moral position but engages with our moral reasoning. The self- reflexivity of the narrative comes in here to jar the reader and to prevent any such propaganda. When Marlow pauses in his storytelling either to move or directly address his group of listener, it reminds the reader of the novel that one is receiving a story, not a truth. When the text issues poetic philosophical statements, we are compelled to contemplate them, and in line with colonialism, this particular poetic statement that

“That kind of thing” was only endurable and enduring when based on a firm conviction in the truth if ideas racially our own, in whose name are established the order, the morality of an ethical progress

compels the Western mind to question the moralist view that imperialism claims to take.

Before going on any further, let us first consider how colonialism itself configures in the novel. Colonialism enters Lord Jim in the form of the pilgrims and more importantly, as the island of Patusan and its people. Colonialism however, complicates the text because, the denouncement of the enterprise exists side by side with its validation- again, the novel does not dictate but merely straddles both positions.

The novel’s title does not read ‘Jim’ but ‘Lord Jim’, thereby ousting the ordinary water-clerk and chief mate Jim and lauding the “virtual ruler” of Patusan. Jim could confidently anticipate a “magnificent chance” to finally be a hero and predictably, Patusan’s terrible political climate gives him that chance to become one. Even Marlow lapses into Manichean description to portray the situation for amidst the “dark-faced men”, Jim stood out in his “white apparel” and with his “gleaming…fair hair [that] seemed to catch all the sunshine”. Marlow muses that Jim must have appeared extraordinary, as though “descended upon them from the clouds”

In becoming a hero, Jim then seals his prophecy to Marlow that “you [Marlow] shall hear of me”, and in turn justifies the colonist’s belief that the native needs the colonist. This is furthered by Doramin’s worry that Jim would leave because the “white men…come to us and in a little while they go…those they leave behind do not know when to look for their return”.

While Jim too ends up colonizing Patusan in that he can exert influence upon it and his status as “Tuan Jim” reinforces colonial binarism, his reasons behind going to Patusan is starkly contrasted with that of Gentleman Brown’s whose intent is purely exploitative. Brown is basically renowned because of his colonial exploits and though, Jim related to the pilgrims his “missed chance” and now relates to the Patusan folks as his “magnificent chance”, Brown’s unscrupulous and deviant ways alleviate Jim’s own selfish but harmless reasons.

However, as aforementioned, this validation of the colonial enterprise exists side by side with its denouncement. Patusan gets introduced to us with an account of its history and we learn how it has been exploited for pepper by colonialism. The passage does not paint the colonists as explorers or saviors but as greedy merchants who have stripped Patusan of its resources and abandoned it- in the satirical tone of the passage (“It made them great!...it made them heroic…it made them pathetic too) lies the criticism too.

The novel in fact, does more than denounce the colonization of foreign land and people- it endows both the land and people with active power, an aspect that is snatched away from them in the act of colonialism. For example, the novel not only illustrates how the Patusan folks need Jim but how Jim needs them as well. Marlow astutely points out how “all these things that made master made him captive” and “it was they that possessed him and made him their own”. So the novel subverts normal power relations that accompany colonialism.

The space itself comes to signify more than just land to conquer and rule or exploit; it becomes a land which rehabilitates and gives a second chance. It is juxtaposed really, for just as the pilgrims “at the call of an idea” and “upheld by one desire” leave behind home, Jim for a similar call to redeem himself and that “missed chance”, leaves behind the sea and settles on land, foreign land at that. Patusan, that liminal space which exists “outside the sphere of its [mankind’s] activities” and is of “no earthly importance to anybody but [to] the astronomers” becomes then home for Jim, jus as the East Indies provided Stein with a home away from home. Marlow in support of this, paints Western soil as being exacting of those who return home for “going home must be like going to render an account”. Jim cannot go back home because as Marlow points it out

The spirit of the land, as becomes the ruler of great enterprises, is careless of innumerable lives. Woe to the stragglers! We exist only in so far as we hang together

But Patusan draws in the West’s rejects and while he no longer exists as Jim of the seas, he exists as Tuan Jim of Patusan.

Many modernist works try to uphold the idea that works of art can provide the unity, coherence, and meaning which has been lost in most of modern life; art will do what other human institutions fail to do (165-166)

Was that what Conrad was trying to accomplish in juxtaposing colonialism and modernism in Lord Jim? Does modernism provide “the unity, coherence and meaning” for the reader? By presenting all sides of the imperialist agenda and its repercussions, this paper is inclined to agree with Klages. The modernist aesthetics of multiple viewpoints, the fragmentary nature of the novel, the self-reflexivity and the poetic prose proposes to the reader that truth is in reach but it requires rigorous revision and questioning of reality as they see it- is someone else’s suffering underlying the prosperous reality that one is experiencing?- history as they know it.