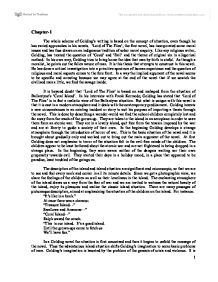 lord of the flies

Chapter-1 The whole scheme of Golding's writing is based on the concept of situation, even though he has varied approaches in his novels. 'Lord of The Flies', the first novel, has incorporated some moral issues and has thus drawn on an indigenous tradition of sober moral enquiry. Like any religious writer, Golding, has treated the question of 'Good' and 'Evil' and the theme of original sin in allegorical method. In his own way, Golding tries to bring home the idea that man by birth is sinful. As though a moralist, he points out the fallen nature of man. It is this thesis that attempts to construct in this novel. He has done a critical investigation into a primitive spectrum of human experience and the question of religious and moral aspects comes to the fore front. In a way the implied argument of the novel seems to be specific and arresting because we may agree at the end of the novel that if we scratch the civilized man a little, we find the savage inside. It is beyond doubt that 'Lord of The Flies' is based on and reshaped from the situation of Ballantyne's 'Coral Island'. In his interview with Frank Kermode, Golding has stated that 'Lord of The Flies' is in fact a realistic view of the Ballantyne situation. But what is unique with this novel is that it is cast in a modern atmosphere and it deals with the contemporary predicament. Golding invents a new circumstances in an existing incident or story to suit his purpose of importing a thesis through the novel. ...read more.

It becomes a symbol of social order. But when once order is imposed with the authority of the conch, the seed for the strife in the island is sown. The need for a chief, power, law and order begins to be stressed. Consequently the group under the leadership of Jack violates the law and paves the way for violence, bloodshed and murder. The darkness within the heart of man begins to appear in its true shape. Cruelty begins to show its head when Jack triggers action against Ralph and his group. Another show of violence occurs during the preparation of fire in the snatching a way of Piggy's spectacles. The cruelty of human heart and muscle power prevail in the island, subduing intelligence and fellow-feeling. Thus Golding points to the need for human values, without which man will tumble down. Another tragic incident that re-imposes the basic theme is the sad death of Simon consequent on the challenge posed by the beast. Simon under took the task of finding the beast and thereby abating the fear of the little boys. He reached the top of the mountain and realized the true nature of the beast. He rushed off to the children with the news of the beast that it was only a dead airman in a parachute. Some of the misguided boys, engaged in a 'beast slaying ritual' in their energy, mistook Simon for the beast and killed him. This pathetic incident points to the real human nature and pictures man as tragic figure. Thus may of the events in the novel are pointers to the shape of darkness in the human heart. ...read more.

The society of the children is devoid of piety and such a society easily falls victim to disorder and anarchy. Even though it may be unreasonable to demand a society of children to be religious in temperament, Golding's imagination runs round such an argument and assumes that a society devoid of religion will be a fallen society. It has already been stated that Golding is the originator of live situations. Generally, the situation of his novels spring out from his passion and vision often in novels of situation the protagonist will be the embodiment of a passion. Here Ralph is depicted as a symbol of 'good' but at the same time he has an innate passion for power. He is intelligent enough to establish his power but fails to exercise authority. So also there is the passion for life in him, which is a major motive in many of Golding's novels. The other major character, Jack, even though villainous in nature, is more impressive than Ralph. Jack too is an embodiment of passion for power. His passion turns him blind to all issues including existence and rescue from the island. It is his greed for power that promotes his love of violence and blood lust. He develops a passion for hunting and such an occupation creates terror in the island. So it is some subdued passions of the two leaders that create the situation of power strife on the island. Golding's vision in the novel is based on what is fundamental in human nature. His characters show man's natural state of being. But they never bluntly exhibit a religious temperament. It is because, Golding never reveals his religious stand openly but we infer his religious mind from the human situations found in his novels. ?? ?? ?? ?? 1 ...read more.