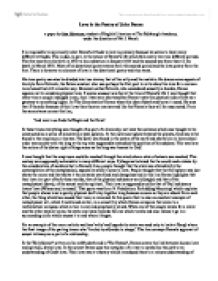 Love in the Poetry of John Donne.

Love in the Poetry of John Donne a paper by Iain Morrison, student of English Literature at The Edinburgh Academy, under the direction of Mr J. Marsh. It is impossible to say exactly what Donne's attitude to love is precisely because he seems to have many different attitudes. This is due, in part, to the nature of Donne's life which falls neatly into two different periods. The first was from his birth in 1572 to his ordination in January 1615 and the second was from then till his death in March 1631. Most of his devotional poetry stems from this second period and the love poetry from the first. There is however an element of love in the devotional poetry and vice versa. His love poetry can also be divided into two strains; that of the witty and the realistic. He draws some aspects of his style from Petrarch, the Italian sonateer who was perhaps the first poet to write about his love for a woman in an honest but still romantic way. However unlike Petrarch, who considered sexuality a burden, Donne appears not to condemn physical love. It seems unusual now but at the time of Donne's life it was thought that every time a couple indulged in sex, their lives were shortened but Donne treats this physical side of love as a gateway to something higher. In 'The Canonization' Donne takes this idea of death and turns it round. He says that if they die because of their love then they are martyrs and like the Phoenix they will be resurrected. From the same stanza comes this line, 'And wee in us finde the'Eagle and the Dove'. In these times everything was thought of as part of a hierarchy, not least the universe which was thought to be constructed as a series of concentric crystal spheres. At the outermost sphere beyond the planets, God was to be found in the empireum or heaven. ...read more.

Angels, presumably, could experience a totally spiritual love, unadulterated by the physical. But man, being part divine and part animal, can only reach the spiritual level through the sensual. So must pure lovers soules descend T'affections, and to faculties, That sense may reach and apprehend, Else a great Prince in prison lies. The inherent superiority of the spiritual level, and the part love can play in refining man's nature towards the spiritual, is expressed in these lines: If any, so by love refin'd, That he soules language understood, And by good love were grown all minde The scientific framework of Donne's view of love is also seen here: But as all severall soules containe Mixture of things, they know not what, Love, these mixt soules, doth mixe againe, And makes both one, each this and that. Just as the four elements, earth, air, fire, and water were supposed to combine to form new substances, so two souls mix to form a new unity. The strength and durability of this new unit is dependent upon how well the elements of the two souls are balanced, as we see from these lines from The Good-Morrow: What ever dyes, was not mixt equally; It our two loves be one, or, thou and I Love so alike, that none doe slacken, none can die. A good example of this state, where two lovers' souls cannot be separated, even when they are physically far apart, is seen in A Valediction: forbidding mourning: If they be two, they are two so As stiffe twin encompasses are two, Thy soule the fixt foot, makes no show To move, but doth, if th'other doe. The idea of two coming together to form one is very important in Donne's view of love. When a couple find perfect love together they become all-sufficient to one another, forming a world of their own, which has no need of the outside world. ...read more.

The seventeenth elegy, "By our first strange and fatal interview," may belong to the same group, and so, one would conjecture, do The Canonization, "For Godsake hold your tongue and let me love" and The Anniversary. In these, at any rate, Donne expresses a purer and more elevated strain of the same feeling as animates The Dream, The Sun-Rising and The Break of Day; and one not a whit less remote from the tenor of Petrarchian poetry. At first sight, there is not much in common between the erudite, dialectical Donne and the peasant-poet Burns, yet it is of Burns one is reminded rather than of the average Elizabethan by the truth and intensity with which Donne sings, in a more ingenious and closely woven strain than the Scottish poet's, the joy of mutual and contented love: All other things to their destruction draw, Only our love hath no decay; This no to-morrow hath nor yesterday. Running it never runs from us away, But truly keeps his first, last, everlasting day. 29 Of the shadow of this joy, the pain of parting, Donne writes also with the intensity, if never with the simplicity, of Burns. The piercing simplicity of Had we never loved sae kindly was impossible to Donne's temperament, in which feeling and intellect were inextricably blended, but the passion of The Expiration is the same in kind and in degree, however, elaborately and quaintly it may be phrased: So, so, break off this last lamenting kiss, Which sucks two souls, and vapours both away. Turn thou ghost that way, and let me turn this, And let ourselves benight our happiest day; We ask'd none leave to love, nor will we owe Any so cheap a death as saying "Go." The Ecstacy blends, and strives to reconcile, the material and the spiritual elements of his realistic and his Platonic strains. But, subtly and highly wrought as that poem is, its reconciliation is more metaphysical than satisfying. It is in the simpler poems from which quotations have been given that the diverse elements find their most natural and perfect union. ...read more.