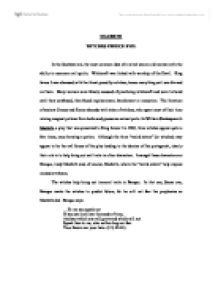 MACBETH WITCHES INDUCE EVIL In the Jacobean era, the most common idea of a witch was an old woman with the ability to summon evil spirits. Witchcraft was linked with worship of the Devil. King James I was obsessed with the threat posed by witches; hence everything evil was blamed on them. Many women were falsely accused of practicing witchcraft and were tortured until they confessed, then faced imprisonment, banishment or execution. The literature of ancient Greece and Rome abounds with tales of witches, who spent most of their time mixing magical potions from herbs and gruesome animal parts. In William Shakespeare's Macbeth, a play that was presented to King James I in 1606, three witches appear quite a few times, once brewing a potion. Although the three "weird sisters" (or witches) may appear to be the evil forces of the play leading to the demise of the protagonist, clearly their role is to help bring out evil traits in other characters. Amongst these characters are Banquo, Lady Macbeth and, of course, Macbeth, whom the "weird sisters" help expose wicked attributes. The witches help bring out immoral traits in Banquo. In Act one, Scene one, Banquo wants the witches to predict future, for he will not fear the prophecies as Macbeth did. Banquo says: ...To me you speak not If you can look into the seeds of time, And say which one will grow and which will not Speak then to me, who neither beg nor fear Your favors nor your hate. ...read more.

She asks: ... Come, you spirits That tend on mortal thoughts, unsex me here, And fill me from the crown to the toe, top-full Of direst cruelty! make thick my blood, Stop up the access and passage to remorse, That no compunctious visitings of nature Shake my fell purpose, nor keep peace between The effect and it! Come to my woman's breasts, And take my milk for gall, you murdering ministers, Wherever in your sightless substances You wait on nature's mischief! Come, thick night, And pall thee in the dunnest smoke of hell, That my keen knife see not the wound it makes, Nor heaven peep through the blanket of the dark, To cry, "Hold, hold!" (1.5; 43-57) Lady Macbeth asks evil spirits to help her succeed. The ambition to fulfill the prophecies makes Lady Macbeth do anything, even if it is evil or might hurt her. When she finally figured a plan to help her husband become King, she did everything she could to help. She planned the regicide of King Duncan and convinced herself and her husband, Macbeth, that this was the only way. "O, never / Shall sun that morrow see!" (1.5; 67-68) she says to Macbeth. She informs him that when Duncan comes for the night, he will never awake to see the morning. She is affirming to Macbeth that they shall kill the king. ...read more.

When the murderers come back from having killed Banquo, Macbeth's best friend, Macbeth seems ruthless. He asks whose blood is on the murderer's face, when answered that it is Banquo's, Macbeth says: "'Tis better thee without, than he within. / Is he dispatched?" (3.4; 16-17). Macbeth is telling the murderer that the blood is better out than in, and asks, quite bluntly, if Banquo, his best friend, is dead. Not a sign of Macbeth being mournful or miserable of his death. Macbeth's murders were performed to ensure that he stayed on the throne - that he would have the most power. The witches exposed immoral attributes in Macbeth, such as temptation, spontaneity and remorselessness. Without a doubt, the witches exposed evil traits in Banquo, Lady Macbeth and Macbeth. Influenced, mostly, by the witches' prophecies and their ambition to fulfill them, Banquo, Macbeth and his wife were led to their downfalls. Shakespeare created the witches to be antagonists in the play, appealing to King James I for he thought they were pure evil. In today's society, witches are thought to look more or less like the three "weird sisters". A television series "Charmed" is based upon three witches - they are the protagonists, looking more like normal humans, who conquer evil instead of creating it. They are the opposite of the "weird sisters". Although the witches were seen acted in Macbeth's play it may be speculated that the witches do not exist and were only a figment of Macbeth's imagination. ...read more.