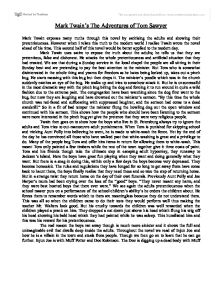 Mark Twain's The Adventures of Tom Sawyer Mark Twain exposes many truths through this novel by satirising the adults and showing their pretentiousness. However when I relate this truth to the modern world I realise Twain wrote the novel ahead of his time. This second half of this novel would be better applied to the modern day. Mark Twain uses satire to expose the truth about the adults; he tells us that they are pretentious, false and dishonest. He attacks the whole pretentiousness and artificial situation that they had created. We see that during a Sunday service in the local chapel the people are all sitting in their Sunday best and are pretending to pay the best attention to the minister. But Tom who is somewhat disinterested in the whole thing and yearns for freedom as he hates being locked up, takes out a pinch bug. He starts messing with this bug but then drops it. The minister's poodle which was in the church suddenly catches an eye of the bug. ...read more.

They become homesick. The rules and regulations they have longed for so long to get away from have come back to haunt them, the boys finally realise that they need these and so take the step of returning home. But in a strange twist they return home on the day of their own funerals. Previously Aunt Polly and Joe Harper's mum had been crying over the loss of the "good" boys. "They never meant any harm, and they were best hearted boys that there ever were." We see again the adults pretentiousness when the school master puts on a performance of the school children's ability's he orders the children about. He forces them to remember words which to them are meaningless because they do not understand them. This was all so when the children came to do their tests they would perform well thus making the teacher Mr. Walters look good. But his cruelty towards the children was well rewarded when the children played a prank on him. They dropped a cat down just above his head which flung his wig off his head showing his bald head which they had painted while he was asleep. ...read more.

From that day Injun had swore revenge and got it in the most brutal fashion. Through reading more and more of this novel we learn something. Although this novel was written in the late 19th century it would really be better applied to today; adult pretentiousness has even spread to rivalry between schools for results in tests and suchlike. Schools are competing for places on league tables. Yet all these things do just increase the size of some people's already enormous egos. The evil of murder has spread and now the fear that lead the children to runaway has left people afraid to go and see the world. People who would once have flown anywhere are now questioning their safety due to world Terrorism. But the one thing that has and always will remain the same is the imagination of all. All people whether they are young or old imagine themselves free from worries and living the life of Reilly. However they all know it will probably never happen but there is always a glimmer of hope because, as long as we can imagine something will happen then who knows one day it may just happen. So cherish that imagination just as Mark Twain does. ...read more.