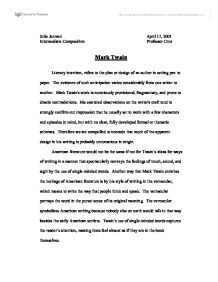 Julie Jentzen April 17, 2001 Intermediate Composition Professor Cruz Mark Twain Literary intention, refers to the plan or design of an author in setting pen to paper. The evidence of such anticipation varies considerably from one writer to another. Mark Twain's work is notoriously provisional, fragmentary, and prone to drastic contradictions. His scattered observations on the writer's craft tend to strongly confirm our impression that he usually set to work with a few characters and episodes in mind, but with no clear, fully developed formal or thematic schemes. Therefore we are compelled to concede that much of the apparent design in his writing is probably unconscious in origin. American literature would not be the same if not for Twain's ideas for ways of writing in a manner that spectacularly conveys the feelings of touch, sound, and sight by the use of single-minded words. ...read more.

(p. 341), "Whar 'n the---you goin' to! Cain't you see nothin' you dash-dashed aig-suckin', sheep-stealin', one-eyed son of a stuffed monkey!" (p. 365). This shows the rural, uneducated portion of America. Before Twain, no other author has ever written in such a manner. By doing so he makes it possible for all readers to feel as if they are in the book, living the story along with the characters. This enriches American literature, because it is a clever way, and the only way to make the reader actually seem to hear and feel the sounds the writer is trying to convey. Contrary to what may be believes, this is actually a very intelligent style of writing, for it is difficult for an author to write in a different level of dialect than they actually speak. The reader can tell that this dialect isn't Twain's own, since he doesn't write with it in every part of the book. ...read more.

Twain's choice of writing style makes him more entertaining, and shows his humerous and fun side. He writes what comes into his mind without fear, feeling no need to prove his intelligence through his writing, because he knows, as well as the reader. Using satire, single-minded words, and writing in the vernacular has all helped Mark Twain to become the classic American icon that he is today. He left behind a legacy of unmatched ingenuity to think of sharp, efficient satire in many of his writings. Twain's use of single-minded words captures the reader's attention, making them feel almost as if they are in the book themselves. His masterful use of the vernacular portrays the speech of early rural America. Twain's use of the vernacular lets the reader read more smoothly since they do not have to pay attention to the structural significance of the word. Since Mark Twain was the first truly great western author to define American writing, he has opened the way for many future authors to come. ...read more.