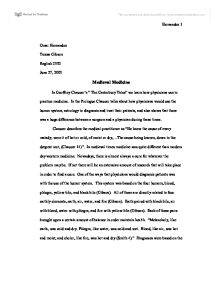 Omar Hernandez Teresa Gibson English 2332 June 27, 2003 Medieval Medicine In Geoffrey Chaucer's " The Canterbury Tales" we learn how physicians use to practice medicine. In the Prologue Chaucer talks about how physicians would use the humor system, astrology to diagnosis and treat their patients, and also shows that there was a huge difference between a surgeon and a physician during these times. Chaucer describes the medical practitioner as "He knew the cause of every malady, were it of hot or cold, of moist or dry,...The cause being known, down to the deepest root, (Chaucer 14)". In medieval times medicine was quite different than modern day western medicine. Nowadays, there is almost always a cure for whatever the problem may be. If not there will be an extensive amount of research that will take place in order to find a cure. One of the ways that physicians would diagnosis patients was with the use of the humor system. This system was based on the four humors, blood, phlegm, yellow bile, and black bile (Gibson). ...read more.

Before anything the physician would figure out the patients astrological chart (Smith 3). This would all eventually correlate with the humor theory depending on the pattern of heat, cold, dryness, and moisture in relation to the sun and planet during the patient's birth (Smith 3). These calculations were based on the nine concentric circles: the first moved, the fixed stars and zodiac, Saturn, Jupiter, mars, sun, Venus, Mercury, Moon (Chaucer Page 1). Then on how the seven planets move through the zodiac, being the tweleve signs: Aries, Taurus, Gemini, cancer, Leo, Virgo, Libra, Scorpio, sagiettarius, Capricorn, Aquarius, Pisces (Chaucer page 1). These twelve signs are directly related to the four humors, blood with the three signs of Gemini, Aquarius, Libra; phlegm with cancer, Scorpio, Pisces; yellow bile with Leo, Aries, Sagittarius; black bile with Capricorn, Taurus, and Virgo (Gibson). It was a very extensive process to be able to diagnosis someone properly. It's definitely not a method that any of our modern day doctors would consider using. ...read more.

Needless to say, it was common that only the wealthy were able to seek a physician's services. Many modern day people tend to believe that the ways of these physicians were extremely primitive. To this day, you may still be able to see a red and white striped spinning pole situated outside of most barber shops, which stems from medieval times when a barber and a physician would share locations; hence the white color representing either purity or cleanliness (shave or haircut), and the red color representing blood (physician services) (Gibson). Some might even say that their methods were unsophisticated and stupid, but they are surely mistaken (Livingston 1). The methods used by the medieval physicians are extremely interesting. It's amazing to think that these physicians had to go through so much in order to diagnosis an illness. The humors theory probably wasn't the best source to in order to treat people. But for what it was, it somehow worked. The fact that they were able to do someone's astrological chart and somehow figure out what was wrong with their patient truly is nothing short of amazing. ...read more.