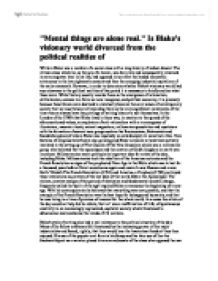 &quot;Mental things are alone real.&quot; Is Blake's visionary world divorced from the political realities of

"Mental things are alone real." Is Blake's visionary world divorced from the political realities of William Blake was a member of a social class with a long history of radical dissent. The Artisan class which he, as the son of a hosier, was born into and consequently remained in as an engraver later in his life, had opposed in turn first the landed mercantile aristocracy in the late eighteenth century and then the emerging industrial capitalism of the early nineteenth. However, in order to determine whether Blake's visionary world had any relevance to the political realities of the period it is necessary to briefly outline what these were. Whilst history usually records these as the emergence of rationalism, utilitarianism, science in a form we now recognise, and political economy, it is precisely because these forces were destined to eventually become the core values of contemporary society that we must beware of recording them as the only significant movements of the time-victors always have the privilege of writing history to suit themselves. In the London of the 1780's that Blake lived in there was, in reaction to the spread of the aforementioned values, an explosion of anti-rationalism with a re-emergence of illuminism, masonic rituals, animal magnetism, millenarian speculation and mysticism with the formation of several new groups such as the Rosicrucians, Behmenists and Swedenborgians (of whom Blake was reputedly an avid disciple) ...read more.

prophetic satire The Marriaqe of Heaven and h**l all of which Blake wrote in the early 1790's portrayed the contemporary French Revolution as the purifying violence that according to Biblical prophecy was the precursor to the imminent redemption of humanity and the world. As time passed however, Blake and his contemporaries grew more and more disillusioned with the revolution as it became more and more b****y, and Robespierre's rule became known as The Terror. The original aims of creating a just and equal society and aiding other countries who wished to do so became submerged in conquest and totalitarianism and eventually the Romantic Movement as a whole was forced to re-examine its beliefs. Advocation of a physical, political revolution and belief in an imminent Biblical Apocalypse gave way to a new idea that the prophecies in the Bible must be interpreted in a spiritual sense. Orc, the fiery spirit of Revolution gives way to Los, a visionary in the fallen world as a central character in Blake's writing. He began to hold the view that revolution must be in the minds of the people, rather than in a political sense and that The Fall and The Redemption must also be explained in a spiritual sense. ...read more.

E.P.Thompson has called this process an 'experience of immiseration' that came upon working people "in a hundred different forms; for the field labourer, the loss of his common rights and the vestiges of village democracy; for the artisan, the loss of his craftsman's status; for the weaver the loss of livelihood and independence; for the child, the loss of work and play in the home; for many groups of workers whose real earnings improved, the loss of security, leisure and the deterioration of the urban environment." In HolY Thursday Blake's indignation at this state of affairs becomes apparent. Individualism has bred social indifference and it is not merely the poverty that appals, but the lack of any real concern or care for its victims. It is possible, then to see Blake's visionary world in a number of ways; as purely concerned with the mental recreation of Eden, as a comment on and presentation of social values, or as a combination of the two. There appears to be in my opinion an inextricable link between the two polemic interpretations of his visions. A coherent social context is unavoidably necessary to permit intelligibility, and usually, as in Blake's case, political and social change are the motivating factors that inspire the need to master reality through art. ...read more.