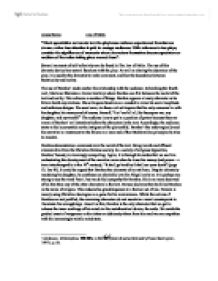 Metadrama in Jew of Malta

James Bevan Jew of Malta "Much speculation surrounds how the playhouse audience experienced Renaissance drama; rather less attention is paid to onstage audiences. With reference to two plays, consider the significance of moments where characters themselves become spectators or auditors of the action taking place around them". Several moments of self-reflexivity can be found in The Jew of Malta. The use of this dramatic device has several functions with the play. As well as altering the dynamics of the play, it is used by the dramatist to make comment, and blur the boundaries between theatricality and reality. The use of Barabas' asides anchor his relationship with the audience. In breaking the fourth wall, Marlowe fabricates a liminal territory where Barabas can flirt between the world of the text and reality. This achieves a number of things. Barabas appears a lonely character as he fails to build any relations. His soliloquies function as a conduit to voice his social ineptitude and nefarious designs. We soon learn, via these evil soliloquies that his only concerns lie with his daughter, his money and of course, himself, "Let 'em kill all, So they spare me, my daughter, ...read more.

His is no more deserved of his fate than any of the other characters in the text. Ferneze declares that she killed Barabas in the name of religion. This reduces his grandiloquence to a farcical set of lies. Ferneze is merely using Chrisitan ideologies as a guise for his malevolence. Whilst the actions of Barabas are not justified, the remaining characters do not ascertain a moral counterpoint to illuminate his wrongdoings. Aswell as this, Barabas is the only character that we get to witness the inner workings of his mind via the metatheatrical device, the aside. We watch the gradual onset of vengeance as his riches are dubiously taken from him and we can empathise with his increasingly volatile mind state. Marlowe deliberately sets up dramatic irony at the expense of any narrative surprise. The implementation of this dramatic technique inverts the audience-actor relationship. Whereas normally, the audience watch in ignorance of the forthcoming events, Barabas orchestrates the development of the plot with the audience. In many ways, Barabas is as much an observer as he is an actor. ...read more.

Hieronimo knows a tragedy form his student days and makes everyone present (Balthazar, Lorenzo, and Bel-Imperia) play a part. This has several functions within the play. It foreshadows the tragic events of Hieronimo and Bel-Imperia that happen imminently after this scene. Hieronimo's provides an ominous reply when Lorenzo and Balthazar suspect his motives, "the plot's already in mine head". This suggests that Hieronimo was destined to commit these sins. It is generally accepted that an audience will suspend their disbelief in the investment of entertainment. However, self reflexivity casts a problem over this emotional transaction as it reminds the audience what they are viewing is fictional. One of the ways in which the audience consumes the text is by living vicariously through the characters. Marlowe complicates this with the meta-fictional stamp he instils on the text. In one way, this assists in our narrative voyage with Barabas as he directly presents himself to the audience and is the only member that breaks the fourth wall. This allows the audience to relate to him. However, Barabas is also the catalyst which destabilises the realism of the text. 1 Marlowe Christopher, The Jew of Malta (Manchester University Press: Bevington, 1997), p. 26. ?? ?? ?? ?? ...read more.