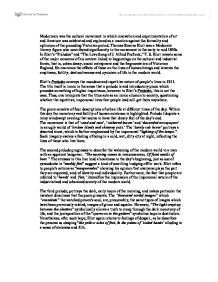 Modernism was the cultural movement in which innovation and experimentation of art and literature was celebrated and explored as a reaction against the formality and optimism of the preceding Victorian period. Thomas Stearns Eliot was a Modernist literary figure who contributed significantly to the movement in the early to mid 1900s. In Eliot's "Preludes" and "The Love Song of J. Alfred Prufrock," T. S. Eliot reveals some of the major concerns of his context linked to happenings on the cultural and industrial fronts; that is, urban decay, social entrapment and the fragmentation of Victorian England. He examines the effects of these on the lives of human beings and laments the emptiness, futility, destructiveness and cynicism of life in the modern world. Eliot's Preludes conveys the mundane and repetitive nature of people's lives in 1911. The title itself is ironic in the sense that a prelude is and introductory piece which precedes something of higher importance, however in Eliot's Preludes, this is not the case. Thus, one interprets that the titles acts as an ironic allusion to society, questioning whether the repetitive, impersonal lives that people lead will get them anywhere. ...read more.

Nonetheless, after such hope, Eliot again returns to feelings of despair, as he describes the persona as clasping "the yellow soles of feet, In the palms of 'soiled hands' alluding to a sense of staleness and filth. The final Prelude, set in the afternoon, reveals Eliot's belief that the spiritual elements of life remain distanced from those of everyday existence. It is implied that Christ is being stretched to his limits and obscured by the city's buildings or ignored by the crowds despite his apparently hopeless attempts to watch over and protect the people from the heavens. Then for the first time in the poem, the persona speaks in first person, "of some infinitely gentle, infinitely suffering thing" However, the persona sharply turns away from any thought of hope, and gives a bitter, cynical laugh, declaring that life and the world around him is nothing more than like old women gathering broken pieces of driftwood for fire. The final image in the poem is one of futility and hopelessness. "The world revolves like ancient women, Gathering fuel in vacant lots." In comparison to Preludes, The Love Song of J. ...read more.

In contrast to the rest of the poem however, in the last section Prufrock distances himself from the harsh urban world, allowing a moment of romantic escape with images of mermaids 'riding seaward on the waves.' Like the tender image of the "infinitely suffering thing" in Preludes, the mermaids refer to beauty and emotion, something that people in this modern world long for, but deny themselves as a result of choosing the certainties of materialism. As such, this image of hope and tranquility quickly fades, as this dream can only continue "Till human voices wake us, and we drown" Both Preludes and The Love Song of Alfred J. Prufrock are significantly influenced by the ideas and techniques of Modernism, and reflect the context in which they were written in. Eliot has described the hopelessness, futility and monotony that shape modern societies, blaming mankind for the atrocities that he must endure. Hence it becomes so clearly evident that Eliot's concerns with spirituality, urban expansion and the breakdown of communication and society have grown and have been greatly shaped by the influences, trends and approaches of his modern context. ...read more.