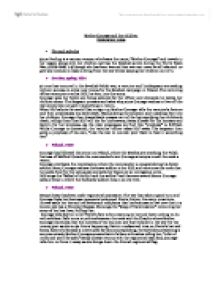 Mother Courage and her children by Brecht

Mother Courage and her children Exploration notes * Plot and sub-plot Anna Fierling is a canteen woman who bears the name, "Mother Courage" and travels in her wagon along with her children serving the Swedish Army during the Thirty Years War, (1618-1648 ). Although she has been warned that war can never be all take and no give she intends to make a living from the war whilst keeping her children out of it. > Sweden, spring 1624 A truce has occurred in the Swedish-Polish war, a recruiter and his Sergeant are seeking without success to enlist new troops for the Swedish campaign in Poland. The recruiting officer attempts to enlist Eilif, her son, into the army. Courage sees her brave son being seduced by the officer and demands he leaves her children alone. The Sergeant protests and asks why; since Courage wishes to live off the war should she not give it something in return. When Eilif admits he would like to sign up, Mother Courage tells the recruiter's fortune and then prophesises his early death. Manipulating the situation and installing fear into her children, Courage then draws black crosses out of the hat signifying her children's death, telling them that Eilif will die for his bravery, Swiss Cheese for his honesty and Kattrin for her kindness. As the play progresses we find this "prophesy" is fulfilled. Whilst Courage is distracted, the recruiter officer takes Eilif away. The sergeant then gives a prophesy of his own, "Like the war to nourish you? Have to feed it something too." > Poland, 1626 Courage has followed the army into Poland, where the Swedes are attacking the Polish fortress of Wallhof. Outside the commander's tent Courage attempts to sell the cook a capon. Courage overhears the conversation where the commander is congratulating his brave soldier. Soon, Courage realises the brave soldier is her Eilif, and convinces the cook that he needs food for the new guest and sells her Capon at an outrageous price. ...read more.

Its immense bareness surprised the audience which was expecting a realistic and detailed set. The red boots used in scene 3 is used as a symbolism; they are primarily prostitutes' boots but also represent beauty and luxury. In combining an innocent character with the object of prostitution Brecht shows that Kattrin seeks love through the only way possible during war, through prostitution. Mother Courage's cart was always the most prominent element on the stage throughout the whole play, its equipment and physical state changed with the change of her business. At the end Courage's forlorn cart stood on the same bare stage as at the start of the play only with the added bareness symbolising the devastation through which the war had led her. Aural In Mother Courage music largely assumes an independent reality which is set apart from the action this is Brecht's use of the verfrumdungseffekte and was very specific about how the actors should perform the songs in his plays. Brecht recommended that the actors should not slip into song (as in a musical) and clearly mark it off from the dialogue. The use of music is never simply an accompany nor completely the expression of a character's current state, at times working as a historical backdrop of a character's background, or a political comment such used In Mother Courage's "Song of Capitulation." The "song of Solomon" neatly summarises one of the plays themes- the rewards of virtue are petite in such corrupt times: there's no use trying to be an angel when you live in h**l! Brecht used song as a form of detachment, allowing time for the audience to contemplate any issues which the play had already engaged in their interests. Brecht also uses music and song as a form of alienation. The songs allow the actor to disengage from his character preventing identification with his character and preventing the audience from empathising with the character. ...read more.

was a political upheaval following the reformation which had divided Christian Europe into Protestant and Catholic states. The first scene opens during the truce of 1622-1625 in the Polish-Swedish war which lasted until 1629 although was separate from the thirty years war. Social Brecht uses the names of the major war leaders at the time only in conversations or events offstage, like the death of General Tilly. This is because Brecht didn't care for how they fought their wars, but how their wars affected the low-class people of the time. It is in this respect he chooses to have a female leading role who shares the same profit motives as the top men, and how she would exploit anyone she meets. Brecht achieves his image of war affected the people at the bottom of the social ladder by ending with Mother Courage almost destitute, knowing two of her children are dead and believing, wrongly, that her eldest son is still alive. Cultural Brecht used a method of presentation which he called "epic theatre" this presented Mother Courage on the stage based upon his Marxist-political ideals. Mother Courage learns nothing through the events of the play. The audience is supposed to learn what she doesn't - that a Capitalist society is corrupt and the decisions we make should not be the same ones Mother Courage makes. Brecht did not direct Mother Courage until 1949 when he had been invited back to East Berlin by the Communist government. Its relevance was most probably even stronger to the audience who had lived through the events of the Second World War. Britain perhaps cannot appreciate Brecht's "Mother Courage and her children" as there hasn't been a war fought on it's land for many years therefore lacks a sense of identification with it- maybe requires a war situation for the message to be appreciated fully. "Mother Courage and her Children" may also be lost in translation of the text, as certain phrases don't exist in different languages and cultures. This can have an effect on the alienation effects of Brecht and translating his linguistic "tricks" is quite impossible. ...read more.