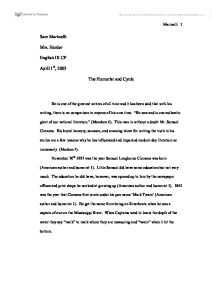 Sam Marinelli Mrs. Harder English III CP April 1st, 2003 The Humorist and Cynic He is one of the greatest writers of all time and it has been said that with his writing, there is no comparison to anyone of his own time. "He was and is one authentic giant of our national literature." (Mencken 6). This man is without a doubt Mr. Samuel Clemens. His brutal honesty, sarcasm, and amazing talent for writing the truth in his stories are a few reasons why he has influenced and impacted modern day literature so immensely (Menken 4). November 30th 1835 was the year Samuel Longhorne Clemens was born (American author and humorist 1). Little Samuel did have some education but not very much. The education he did have, however, was opened up to him by the newspaper offices and print shops he worked at growing up (American author and humorist 1). 1861 was the year that Clemens first wrote under his pen name 'Mark Twain' (American author and humorist 1). ...read more.

In this story he described honestly what his characters were, exactly what they were- fat, bald, ugly, stupid, no vertically challenged or somewhat thin, he was brutally honest (Chew 1). That was and is his mark on literature (Chew 1). His brutal honesty was what captured critic's attention and got it in the first place (Chew 1). It was hard and right to the point, a lot like Twain himself. This alone influences copycat writers today like Garrison Keillor, who writes in the same folk-style as Twain did (Literary Classics 1). Another reason Mark Twain has impacted what we know as the literary world today, would have to be the distinct sarcastic way he writes. Examples of that could be found in almost every published or unpublished piece of writing Twain ever created. Including, The Innocents Abroad, Tom Sawyer, The Prince and the Pauper, and most obviously The Mysterious Stranger. (Mark Twain 2). Which was a story that reveals the absurdity and the ridiculousness of the village of Eselddorf (Mark Twain 2). ...read more.

(Mark Twain 2). Such 'human weaknesses' to him were sadly that of tradition, religion, and different prejudices around the world (Menken 2). Another example of human weakness from The Innocents Abroad would be the fact that Twain poked fun at both American and European manners (Chew 1). For that and many other reasons Mark Twain, better known as Samuel Longhorne Clemens might be considered the most influential writer when it comes to modern day literature (Tributek 1). His unique, one of a kind style of writing won him all kinds of successes. His legacy still continues today, well over a 100 years later. (Tributek 1). Because of that, Twain's writing continues to wow children and adults alike all over the world (Zwick 3). Twain died like many famous people in history, very tragically after the death of his daughter and wife. His legacy will outlive everyone who reads his books, and if not that for sure his literature, popularity and influence will. (Mark Twain 2). That much has become apparent, all you have to do is look to history. (Addison 1). Marinelli 1 ...read more.