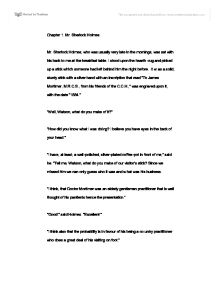 Chapter 1. Mr. Sherlock Holmes Mr. Sherlock Holmes, who was usually very late in the mornings, was sat with his back to me at the breakfast table. I stood upon the hearth-rug and picked up a stick which someone had left behind him the night before. It was a solid, sturdy stick with a silver band with an inscription that read "To James Mortimer, M.R.C.S., from his friends of the C.C.H.," was engraved upon it, with the date "1884." "Well, Watson, what do you make of it?" "How did you know what I was doing? I believe you have eyes in the back of your head." "I have, at least, a well-polished, silver-plated coffee-pot in front of me," said he. "Tell me, Watson, what do you make of our visitor's stick? Since we missed him we can only guess who it was and what was his business. "I think, that Doctor Mortimer was an elderly gentleman practitioner that is well thought of his pantients hence the presentation." "Good!" said Holmes. "Excellent!" "I think also that the probability is in favour of his being a country practitioner who does a great deal of his visiting on foot." ...read more.

Mortimer left the hospital in order to start a practice for himself. " "That could be the case." " For someone to have a position in the hospital would a man that already had a practise in London someone who wouldn't leave for the country, so our man must have been a senior student. And he left five years ago--the date is on the stick. So your middle-aged family emerges as a young fellow under thirty, amiable, unambitious, absent-minded, and the possessor of a favourite dog, which I should describe roughly as being larger than a terrier and smaller than a mastiff." I laughed as Sherlock Holmes leaned back in his settee and blew little wavering rings of smoke up to the ceiling. From my small medical shelf I took down the Medical Directory and looked. There were several Mortimers, but only one who could be our visitor. I read his record aloud, when I'd finished Holmes looked at me. "No mention of that local hunt, Watson," said Holmes with a mischievous smile, "but a country doctor, as you very astutely observed. ...read more.

Dr. Mortimer blinked through his glasses in mild astonishment. "Why was it bad?" "Only that you have disarranged our little deductions. Your marriage, you say?" "Yes, sir. I married, and so left the hospital, and with it all hopes of a consulting practice. It was necessary to make a home of my own." "Come, come, we are not so far wrong, after all," said Holmes. "And now, Dr. James Mortimer--" "Glad to meet you, sir. I have heard your name mentioned in connection with that of your friend. You interest me very much, Mr. Holmes. I had hardly expected so dolichocephalic a skull or such well-marked supra-orbital development. I would really like to examine it, maybe take a cast? it would be a prize for any museam , let alone myself." "I see that were are both enthusiasts in our fields, please sit." Holmes was silent, but his little darting glances showed me the interest which he took in our curious companion. "I presume, sir," said he at last, "you didn't just call to examine my skull?" "No that was just a pleasureI came to you, Mr. Holmes, because I need your help for an extraordinary problem" "Well, Dr. Mortimer, what is the exact nature of the problem is in which you demand my assistance." ...read more.