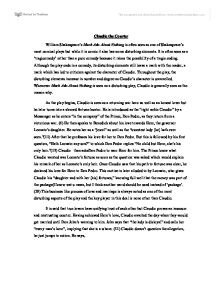 Much Ado about Noting

Claudio the Courter William Shakespeare's Much Ado About Nothing is often seen as one of Shakespeare's most comical plays but while it is comic it also has some disturbing elements. It is often seen as a 'tragicomedy' rather than a pure comedy because it raises the possibility of a tragic ending. Although the play ends in a comedy, its disturbing elements still leave a mark with the reader, a mark which has led to criticism against the character of Claudio. Throughout the play, the disturbing elements increase in number and degree as Claudio's character is unravelled. Whenever Much Ado About Nothing is seen as a disturbing play, Claudio is generally seen as the reason why. As the play begins, Claudio is seen as a returning war hero as well as an honest lover but he later turns into a shrewd fortune hunter. He is introduced as the "right noble Claudio" by a Messenger as he enters "in the company" of the Prince, Don Pedro, as they return from a victorious war. (6) He then speaks to Benedick about his love towards Hero, the governor Leonato's daughter. ...read more.

(III.ii.112-14) Jackie Shead said in her critic, Are our eyes our own, that "A decent lover might threaten Don John with a duel if he failed to support his accusations; but Claudio is already planning revenge on Hero for her possible misdeeds, not on her accuser for possible slander." Claudio plans even before seeing the scene at the balcony that he would shame Hero at the altar if he saw anything. Having seen a possible Hero make love to an unknown man at her balcony, that very same revenge is what he goes through with at the altar the next day. He refuses to marry "a rotten orange" who "knows the heat of a luxurious bed." As she blushes at this accusation, Claudio says it is out of "guiltiness not modesty." This harsh defamation of Hero, in front of all the townspeople over a questionable accusation, lowers Claudio's character and leads to the "death" of Hero as proposed by the Friar. It is seen as the darkest scene in Shakespeare's writing due to the degree of the slurs, for which once again Claudio is the cause. ...read more.

This is dubious, given the calculated spite in his public humiliation of Hero and his callous response to her 'death'." The repentance he has shown is truly disturbing because he never actually admits his mistake. He just takes it as a mistake one could make rather than looking at his overreaction after the mistake. The slandering that Hero received isn't even close to the repentance that Claudio felt. The most disturbing part about this is that in the end Claudio still receives Hero's hand in marriage. Shakespeare's Much Ado About Nothing is a comedy with a happy ending but it is well known for its disturbing elements as well. The norm around critics of the play is that the controversial character Claudio is generally seen as the reason behind those elements. Claudio starts as a war hero and honest lover but turns into a shrewd fortune hunter, an insecure lover as well as a slandering villainous character. In the end he receives a happy ending through his proposed marriage with Hero but he proves to be a true courter, one who plays the lover. That's all he really does. He plays a lover but subsequently fails to come through for his love, which leads to the many disturbing aspects of this play. ...read more.