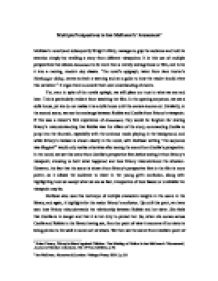 Multiple Perspectives in Ian McEwan's 'Atonement' McEwan's novel (and subsequently Wright's film), manages to grip the audience and hold its attention simply by retelling a story from different viewpoints. It is this use of multiple perspectives that allows Atonement to be more than a merely average book or film, and turns it into a moving, modern day classic. 'The novel's epigraph, taken from Jane Austen's Northanger Abbey, serves as both a warning and as a guide to how the reader should view this narrative.'1 It urges them to consult their own understanding of events. Yet, even in spite of the novels epitaph, we still place our trust in what we see and hear. This is particularly evident from watching the film. In the opening sequence, we see a dolls house, yet we do not realise it is a dolls house until the camera zooms out. Similarly, in the second scene, we see the exchange between Robbie and Cecilia from Briony's viewpoint. If this was a viewer's first experience of Atonement, they would be forgiven for sharing Briony's misunderstanding that Robbie was the villain of ...read more.

While McEwan uses six different viewpoints throughout the film, when it comes to the attack, we only see Briony's perspective, which shows that not only was she the only one to see the attack, but also serves to highlight the fact that her opinion, which has been formed from her clouded perspective, will be the only one which matters. This could be due to the fact that throughout the text, and indeed the film to a certain extent, two authorial figures are seen; McEwan and Briony. Although Briony is a fictional character, and although we get other characters viewpoints in certain scenes, we are very much aware that she is set apart from the others, that this is her story to tell. We see this manipulation of perspective as Briony accepts the fact that she is too young to understand certain things, and the use of language like 'she wasn't to know it then'3 emphasises to the reader that this is an older Briony looking back on her young self, trying to justify her wrongdoings. ...read more.

For example, in the novel, the reader is told of the fact that Briony feels bound to protect her older sister from the advances of the housekeeper's son, yet in the film, all that there is to establish this fact is Saoirse Ronan's acting. Wright uses cinematic effects to demonstrate McEwan's idea of multiple perspectives, for example, his use of lighting in the library scene and the scene with the attack on Lola, as well as his use of focus in the scene in which Robbie gives the letter to Briony. However, having said all that, due to excellent casting and high standard of acting, the use of different perspectives on certain scenes still manages to achieve its aim of dragging us into the world of the Tallis', making us feel what the characters feel and forget that this is a fictitious story. After reading McEwan's novel, the urge is there to go back and read it from the beginning, with the new knowledge of Cecilia's and Robbie's relationship. Atonement makes great use of multiple perspectives, showing us how events can look completely different from the eyes of another person, and what disastrous consequences these different perspectives can have on peoples lives. ...read more.