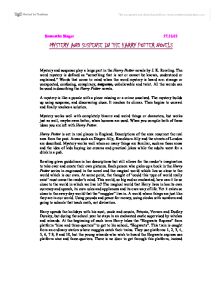 Mystery and Suspense In the Harry Potter Novels.

Samantha Singer 27.10.02 MYSTERY AND SUSPENSE IN THE HARRY POTTER NOVELS Mystery and suspense play a large part in the Harry Potter novels by J. K. Rowling. The word mystery is defined as "something that is not or cannot be known, understood or explained." Words that come to mind when the word mystery is heard are: strange or unexpected, confusing, conspiracy, suspense, unbelievable and twist. All the words can be used in describing the Harry Potter novels. A mystery is like a puzzle with a piece missing or a crime unsolved. The mystery builds up using suspense, and discovering clues. It reaches its climax. Then begins to unravel and finally reaches a solution. Mystery works well with completely bizarre and weird things or characters, but works just as well, maybe even better, when humans are used. When you compile both of these ideas you are left with Harry Potter. Harry Potter is set in real places in England. Descriptions of the area resurrect the real area from the past. Areas such as Diagon Ally, Knockturn Ally and the streets of London are described. Mystery works well when so many things are familiar, such as these areas and the idea of kids buying ice creams and practical jokes while the adults went for a drink in a pub. Rowling gives guidelines in her descriptions but still allows for the reader's imagination to take over and create their own pictures. Each person who picks up a book in the Harry Potter series in engrossed in the novel and the magical world which lies so close to the world which is our own. At some point, the thought of 'could this type of world really exist' must cross the reader's mind. This world, so big and so enchanted, how can it lie so close to the world in which we live in? The magical world that Harry lives in has its own currency and speech, its own rules and appliances and its own way of life. ...read more.

They formed a bond and are still friends. Aragog was mistaken to be Slytherin's monster and that is how Hagrid was expelled. Aragog claims that he promised Hagrid that he would never kill any human. He claims that he hasn't broken that promise. This proves that Hagrid is not responsible for opening the chamber of secrets. At that point, Aragog's children all come and Aragog gives them permission to eat Harry and Ron, but the flying car saves them. Aragog knew what the monster from the chamber of secrets was, but because it was so feared by spiders, he did not name it. This, although an important clue, did not seem to help Harry very much, or so he thought. Suddenly it hits Harry, "Ron - that girl who died. Aragog said she was found in a bathroom." "What if she never left the bathroom? What if she's still there?" Then Ron catches on - Moaning Myrtle. On the way to Myrtle's bathroom, Ron and Harry are caught by Professor McGonagall who asks them what they are doing. Harry thinks on his feet and tells her that they were going to visit Hermione. She is very sympathetic and grants them permission. This visit proves to be most helpful. In Hermione's right hand, a piece of paper is clenched which explains all about the Basilisk. Beneath the print was a single word in Hermione's handwriting - "pipes" Of the many fearsome beasts and monsters that roam our land, there is none more curious or more deadly than the Basilisk, known also as the King of Serpents. This snake, which may reach gigantic size, and live many hundreds of years, is born from a chicken's egg, hatched beneath a toad. Its methods of killing are most wondrous, far aside from its deadly and venomous fangs, the Basilisk has a murderous stare, and all who are fixed with the beam of its eye shall suffer instant death. ...read more.

He makes Ginny come down to the chamber and wait for the honourable Harry Potter to save her and give him, Tom, a chance to kill Harry. When he comes face to face with Harry he wonders whether there is anything special about him that made it so hard for him to kill Harry. "I can see now - there is nothing special about you, after all. I wondered, you see." Tom is cocky and believes that he can defeat Harry now and becomes angered with the Basilisk (monster of Slytherin), when it chases the Phoenix instead of Harry. When Tom believes he has defeated Harry he speaks like he is high and almighty and tells Harry that Lord Voldemort got him in the end and it was inevitable. "You'll be back with your dear Mudblood mother soon, Harry ... She bought you twelve years of borrowed time ... but Lord Voldemort got you in the end, as you knew he must." When he realises the phoenix tears heal wounds, he feels foolish but quickly covers it by stating that he would rather it this way so it is one on one, Voldemort against Harry, but Harry quickly kills him by plunging the Basilisk fang into the diary where it burns a hole like acid would have done. Ink poured out of the book in torrents and Riddle vanished with a contorted look of pain on his face. He was defeated. After Harry had done a lot of explaining about what had occurred in the Chamber of Secrets and how they had found out about where it was and what was in it, he was rewarded and the book ends on a cheerful note with Harry saving the day again. Voldemort is still hiding somewhere out there in the world, so it leaves it open for him to return yet again in the next novel to try and defeat Harry once again, using another method and managing to affect another Defence against The Dark Arts teacher. ...read more.