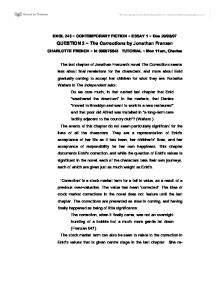 Natasha Walters in The Independent asks about Jonathan Franzen's 'The Corrections': Do we care much, in that rushed last chapter that Enid &quot;weathered the downturn&quot; in the markets, that Denise &quot;moved to Brooklyn and went to work in a new res

ENGL 243 ~ CONTEMPORARY FICTION ~ ESSAY 1 ~ Due 20/08/07 QUESTION 2 ~ The Corrections by Jonathan Franzen CHARLOTTE FRENCH ~ id 300075543 TUTORIAL ~ Mon 11am, Charles The last chapter of Jonathan Franzen's novel The Corrections seems less about final revelations for the characters, and more about Enid gradually coming to accept her children for what they are. Natasha Walters in The Independent asks: Do we care much, in that rushed last chapter that Enid "weathered the downturn" in the markets, that Denise "moved to Brooklyn and went to work in a new restaurant" and that poor old Alfred was installed in "a long-term care facility adjacent to the country club"? (Walters ) The events of this chapter do not seem particularly significant for the lives of all the characters. They are a representation of Enid's acceptance of her life as it has been, her children's' lives, and her acceptance of responsibility for her own happiness. This chapter documents Enid's correction, and while the question of Enid's values is significant in the novel, each of the characters take their own journeys, each of which are given just as much weight as Enid's. 'Correction' is a stock market term for a fall in value, as a result of a previous over-valuation. The value has been 'corrected'. The idea of stock market corrections in the novel does not feature until the last chapter. The corrections are presented as slow in coming, and having finally happened as being of little significance: The correction, when it finally came, was not an overnight bursting of a bubble but a much more gentle let down (Franzen 647). ...read more.

As a child, Gary was the one who could be relied upon to preserve Enid's illusions that she was being a good parent. He used to pretend to enjoy playing ping-pong with her, believing that terrible harm would come to him when he could no longer preserve his mother's illusions. When it comes to the family Christmas in St. Jude, Gary also preserves his mother's illusions as long as possible. He fails to shatter her illusion by telling her that her grandson Jonah will not be coming to St Jude after all. Gary is also quite destructive in his attempts to win his mother's approval by shattering the illusions that Enid has created about her other children's' lives. Gary has strived for the ideals of marriage and taste and class that his mother has so over-valued throughout his life: He wanted to say to her: Of your three children, my life looks by far the most like yours! I have what you taught me to want! And now that I have it, you disapprove of it! (Franzen 252) Gary has always tried to live by Enid's values. But he does not realise by presenting Enid with an example of just how materialistic their values are, he shatters one of her illusions. The clash of Enid's idea of taste with Caroline's gives Enid another example of Denise's opinion that "some tastes are better than others"(Franzen 113). This incident provokes feelings of inferiority for Enid, and in emphasising how her taste does not align with her children's' it also reminds her that their values do not align with her ideals. ...read more.