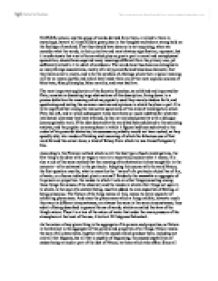 NATURE, natural, and the group of words derived from them, or allied to them in etymology, have at all times filled a great pl

NATURE, natural, and the group of words derived from them, or allied to them in etymology, have at all times filled a great place in the thoughts and taken a strong hold on the feelings of mankind. That they should have done so is not surprising, when we consider what the words, in their primitive and most obvious signification, represent; but it is unfortunate that a set of terms which play so great a part in moral and metaphysical speculation, should have acquired many meanings different from the primary one, yet sufficiently allied to it to admit of confusion. The words have thus become entangled in so many foreign associations, mostly of a very powerful and tenacious character, that they have come to excite, and to be the symbols of, feelings which their original meaning will by no means justify; and which have made them one of the most copious sources of false taste, false philosophy, false morality, and even bad law. The most important application of the Socratic Elenchus, as exhibited and improved by Plato, consists in dissecting large abstractions of this description; fixing down. to a precise definition the meaning which as popularly used they merely shadow forth, and questioning and testing the common maxims and opinions in which they bear a part. It is to be regretted that among the instructive specimens of this kind of investigation which Plato has left, and to which subsequent times have been so much indebted for whatever intellectual clearness they have attained, he has not enriched posterity with a dialogue (unrecognizable text). If the idea denoted by the word bad been subjected to his searching analysis, and the popular commonplaces in which it figures had been submitted to the ordeal of his powerful dialectics, his successors probably would not have rushed, as they speedily did, into modes of thinking and reasoning of which the fallacious use of that word formed the corner stone; a kind of fallacy from which lie was himself singularly free. ...read more.

The deaths of those whom tyrants or persecutors have made martyrs in any noble cause, have clone a service to mankind which would not have been obtained if they had died by accident or disease. Yet whatever incidental and unexpected benefits may result from crimes, they are crimes nevertheless. In the second place, if good frequently comes out of evil, the converse fact, evil coming out of good, is equally common. Every event public or private, which, regretted on its occurrence, was declared providential at a later period on account of some unforeseen good consequence, might be matched by some other event, deemed fortunate at the time, but which proved calamitous or fatal to those whom it appeared to benefit. Such conflicts between the beginning and the end, or between the event and the expectation, are not only as frequent, but as often held up to notice, in the painful cases as in the agreeable; but there is not the same inclination to generalize on them; or at all events they are not regarded by the moderns (though they were by the ancients) as similarly an indication of the divine purposes: men satisfy themselves with moralizing on the imperfect nature of our foresight, the uncertainty of events, and the vanity of human expectations. The simple fact is, human interests are so complicated, and the effects of any incident whatever so multitudinous, that if it touches mankind at all, its influence on them is, in the great majority of cases, both good and bad. If the greater number of personal misfortunes have their good side, hardly any good fortune ever befel any one which did not give either to the same or to some other person, something to regret: and unhappily there are many misfortunes so overwhelming that their favourable side, if it exist, is entirely overshadowed and made insignificant; while the corresponding statement can seldom be made concerning blessings. ...read more.

They measure the degree of guilt by the strength of their antipathy; and hence differences of opinion, and even differences of taste, have been objects of as intense moral abhorrence as the most atrocious crimes. It will be useful to sum up in a few words the leading conclusions of this Essay. The word Nature has two principal meanings: it either denotes the entire system of things, with the aggregate of all their properties, or it denotes things as they would be, apart from human intervention. In the first of these senses, the doctrine that man ought to follow nature is unmeaning; since man has no power to do anything else than follow nature; all his actions are done through, and in obedience to some one or many of nature's physical or mental laws. In the other sense of the term, the doctrine that man ought to follow nature, or in other words, ought to make the spontaneous course of things the model of his voluntary actions, is equally irrational and immoral. Irrational, because all human action whatever, consists in altering, and all useful action in improving, the spontaneous course of nature: Immoral, because the course of natural phenomena being replete with everything which when committed by human beings is most worthy of abhorrence, any one who endeavoured in his actions to imitate the natural course of things would be universally seen and acknowledged to be the wickedest of men. The scheme of Nature regarded in its whole extent, cannot have had, for its sole or even principal object, the good of human or other sentient beings. What good it brings to them, is mostly the result of their own exertions. Whatsoever, in nature, gives indication of beneficent design, proves this beneficence to be armed only with limited power; and the duty of man is to co-operate with the beneficent powers, not by imitating but by perpetually striving to amend the course of nature---and bringing that part of it over which we can exercise control, more nearly into conformity with a high standard of justice and goodness. ...read more.