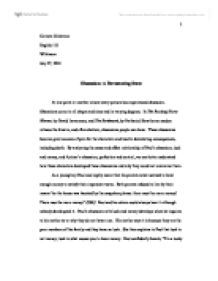 Carmen Galzerano English 111 Wilkinson July 27, 2004 Obsession: A Devastating State At one point or another almost every person has experienced obsession. Obsessions come in all shapes and sizes and in varying degrees. In The Rocking Horse Winner, by David Lawerence, and The Birthmark, by Nathaniel Hawthorne readers witness the bizarre, and often shallow, obsessions people can have. These obsessions become great sources of pain for the characters and lead to devastating consequences, including death. By analyzing the cause and effect relationship of Paul's obsession, luck and money, and Aylmer's obsession, perfection and control, we can better understand how these characters developed these obsessions and why they could not overcome them. As a young boy Paul was highly aware that his parents never seemed to have enough money to satisfy their expensive tastes. Both parents refused to live by their means "so the house was haunted by the unspoken phrase: there must be more money! There must be more money" (399)! Paul and his sisters could always hear it although nobody dared speak it. ...read more.

He would ride the horse frantically day after day his desire to win and make more money increasing with each rock. After Paul had not been sure for a while he delved further into madness and laid all his hopes in one derby. Tense and frail Paul took his final ride, "he ceased riding urging his wooden horse. Then he fell with a crash to the ground" (409). Greed and lack of love were the central causes of Paul's demise. His mother was extremely greedy and had never loved her children. Paul just wanted his mother to be happy, "I started it for mother. She said she had no luck, because father is unlucky, so I thought if I was lucky, it might stop the whispering" (405). The whispering Paul is referring to is the inescapable howl constantly coming from the house, "there must be more money" (398). Paul's desire to make his mother happy and gain her affection came at the cost of his young life. Even in the end his dying words were "Mother, did I ever tell you? ...read more.

His Brightest diamonds were the merest pebbles, and felt to be so by Himself, in comparison with the inestimable gems which lay Hidden beyond his reach (637). Realizing this Georgiana takes the enchanting potion Aylmer created knowing he cannot accept anything less than perfection. When the mark finally disappears Aylmer exclaims, "My peerless bride it is successful! You are perfect" (640)! Now he and Georgiana can be happy. Not a moment later his beauty says the haunting words, "Do not repent that with so high and pure a feeling, you have rejected the best the earth could offer. Aylmer, dearest Aylmer, I am dying" (640). Aylmer paid the ultimate price for his obsession. Not only did he lose his wife but the last times he spent with her he was disgusted and made her feel terrible. An obsession with anything is unhealthy. Paul and Aylmer did not recognize the severity of their obsessions in time to prevent the serious consequences they experienced. Both characters were obsessed with superficial things that could not last. Something valuable is gained when the reader connects with those who suffered and realizes nothing is more valuable than a human life. 1 ...read more.