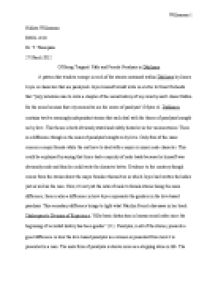 Of Being Trapped: Male and Female Paralysis in Dubliners

﻿Williamson Nikkita Williamson ENGL 4510 Dr. T. Thompson 27 March 2012 Of Being Trapped: Male and Female Paralysis in Dubliners A pattern that tends to emerge in each of the stories contained within Dubliners by James Joyce is characters that are paralyzed. Joyce himself would write in a letter to Grant Richards that "[m]y intention was to write a chapter of the moral history of my country and I chose Dublin for the scene because that city seemed to me the center of paralysis" (Myers 4). Dubliners, contains twelve seemingly independent stories that each deal with the theme of paralysis brought on by love. This theme is both obviously stated and subtly hinted at in the various stories. There is a difference though in the cases of paralysis brought on by love. Only four of the cases concern a major female while the rest have to deal with a major or minor male character. This could be explained by saying that Joyce had a majority of male leads because he himself was obviously male and thus he could write the character better. Evidence to the contrary though comes from the stories about the major females themselves in which Joyce had written the ladies just as well as the men. ...read more.

His Uncle causes him to be late by not coming home and this begins to make the boy feel as if he is trapped. His Uncle does finally arrive but because he arrives so very late to the bazaar, the boy finds himself too embarrassed about his imagined failure to bring himself to do anything. With almost all of the stalls being closed and the people being rude to him in those that do happen to be open, he fails to see he still has a chance to buy something and becomes paralyzed. His carefully cultivated belief falls apart before his eyes: "Gazing up into the darkness I saw myself as a creature driven and derided by vanity; and my eyes burned with anguish and anger" (Joyce 46). The moment when the boy's fantasy didn't come to life, he started to see himself from another perspective. As he is standing there before one of the few stalls open, he comes to the realization that his motivations may not have been as noble as he had first thought they were, that maybe the love he had imagined for the girl wasn?t enough to help carry him through his plans. He wasn?t going to the bazaar to acquire a gift for the object of his affection; he was going for far more selfish reasons. ...read more.

She becomes unable to move and all the whirring thoughts inside of her head have stopped, causing her to completely shut down: ?She set her white face to him, passive, like a helpless animal. Her eyes gave him no sight of love or farewell or recognition? (51). This love-based paralysis is somewhat similar to the boy?s in ?Araby?, both being that their love wasn?t enough to carry them through with their respective plans. The end result is different however. The boy in ?Araby? recognized that this love wasn?t enough but Eveline hasn?t gained any knowledge from her own bout of paralysis. While the clarity is subject to interpretation, there is a difference between the circumstances of the paralysis brought on by love in each female and male case in Joyce?s Dubliners. The males are shown as having hope of overcoming their paralysis because it is there to serve as a learning experience. They are on the stepping stones of live and this is just another moment that they have to fight thought. For the women however, it is not that simple. Their paralysis is something final. There is nothing to learn from it; instead, it is as if they are being punished for trying to change their situation. They are being forced back to where they had come from, showing a stark difference in the roles of men and women in Joyce?s literary portrayal of Dublin. ...read more.