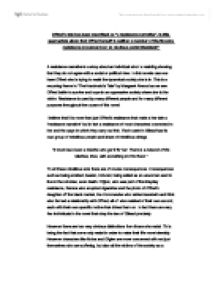 Offred's tale has been described as &quot;a resistance narrative&quot;. Is this appropriate given that Offred herself is neither a member of the Mayday resistance movement nor an obvious social dissident?

Offred's tale has been described as "a resistance narrative". Is this appropriate given that Offred herself is neither a member of the Mayday resistance movement nor an obvious social dissident? A resistance narrative is a story about an individual who is resisting showing that they do not agree with a social or political view. In this novels case we have Offred who is trying to resist the tyrannical society she is in. This is a recurring theme in "The Handmaid's Tale" by Margaret Atwood as we see Offred battle to survive and cope in an oppressive society where she is the victim. Resistance is used by many different people and for many different purposes throughout the course of this novel. I believe that it is more than just Offred's resistance that makes her tale a "resistance narrative" but in fact a resistance of most characters connected to her and the ways in which they carry out this. Each caste in Gilead has its own group of rebellious people and share of rebellious doings. "It must have been a Martha who got it for her. There is a network of the Marthas, then, with something in it for them." ...read more.

She also clings on to the idea that he or someone will come and save her from the terrible regime. This is a constant resource of strength for her during the novel, however towards the end I believe that she starts to give up hope of ever escaping or being rescued as she talks of making a life for herself. "I have made a life for myself, here, of a sort." By saying this Offred has given up hope of ever leaving Gilead and accepts that this is all she ever will have and has to make the best of it. Along with mental resistance Offred does physically resist the situation she is in. There are many instances in the novel where Offred is aware that what she is doing is wrong and if caught would be punished, however she carries on. Chapter twenty-three is the first chapter in which we, as readers, witness a secret meeting between the Commander and Offred. In this meeting they play Scrabble, I believe that Atwood is trying to create a sense of irony that playing a game could be so rebellious and could result in punishment. This event is also very like another form of resistance by Offred when she steals butter: she is conscious of her external appearance to others and as she lacks cosmetics she has to settle for whatever she can get her hands on. ...read more.

The most prominent example of this is the Second World War. There were many different resistant groups opposing the n**i's, all of whom were unsuccessful in destroying their oppressors. There are many similarities to historical events throughout the novel and I believe this to be no coincidence. "Every single practices described in the novel are drawn from historical records."1 I feel Atwood was heavily influenced by her trip to Afghanistan; the idea that the handmaid's wear veils I feel is a parallel to that of the women in Afghanistan who wear 'chador'. She even admitted that the book would not have been the same if she had not visited Afghanistan. "Would I have written the book if I had never visited Afghanistan? Possibly. Would it have been the same? Unlikely."2 As we progress through the novel we come to realise that one major part of the plot is how Offred survives rather than how she escapes and resistance is undoubtedly how she achieves this. Hence, this is why I believe that "the Handmaid's Tale" is a "resistance narrative" as there are many types of resistance other than openly being a rebel or being part of a rebellious group. Offred carries out her own unique types of resistance to help her cope with the burden that the totalitarian society, that she is part of, bears on her making this novel the story of her resistance. ...read more.