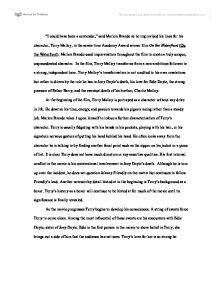 "I could have been a contender," said Marlon Brando as he improvised his lines for his character, Terry Malloy, in the seven-time Academy Award winner film On the Waterfront (On the Waterfront). Marlon Brando used improvisation throughout the film to create a truly unique, unprecedented character. In the film, Terry Malloy transforms from a non-ambitious follower to a strong, independent hero. Terry Malloy's transformation is not credited to his own revelations but rather is driven by the role he has in Joey Doyle's death, his love for Edie Doyle, the strong pressure of Father Barry, and the eventual death of his brother, Charlie Malloy. At the beginning of the film, Terry Malloy is portrayed as a character without any drive in life. He devotes his time, energy, and passion towards his pigeon racing rather than a steady job. Marlon Brando takes it upon himself to imbue a further characterization of Terry's character. Terry is usually fidgeting with his hands in his pockets, playing with his hair, or his signature nervous gesture of putting his hand behind his head. ...read more.

This is the first sign that Terry is developing a sense of moral righteousness. While telling Edie, Terry's demeanor begins to change. He keeps eye contact with her and uses his hands to talk, as opposed to relying on his go-to nervous gestures. Unfortunately, Johnny Friendly starts to notice a change in Terry and he sends Charlie Malloy out to talk to him. With much hesitation and trepidation, Charlie picks up Terry. During the car ride, Terry finally asserts himself. He reveals the truth about the night he threw his boxing title and how Charlie made him do it. For the first time, the viewer sees Terry standing up against another character. Terry tells Charlie, "You don't understand. I coulda had class. I coulda been a contender. I coulda been somebody, instead of a bum, which is what I am, let's face it. It was you, Charlie," (On the Waterfront). From this point on, Terry only becomes more fueled in his endeavors to become an honorable man. Soon after Terry leaves he discovers Charlie's dead body. ...read more.

And I'm glad what I done to you, ya hear that? I'm glad what I done!" (On the Waterfront). After this dispute a fight breaks out between Terry and Friendly. Terry is left lying on the pier and Father rushes over to Terry, telling him, "You've lost the battle but you have a chance to win the war". In this defining moment, Terry asks Father to put him on his feet. It is Terry's final walk from the pier to the work entrance that completes his ultimate transformation. This walk symbolizes the end of Friendly's abusive, austere reign and the beginning of a proper Union for hundreds of men. In the end a "bum" became the hero of the waterfront. It was the courage of a single man that saved hundreds of workers. Terry Mallow's view of Johnny Friendly was drastically altered after his misunderstood involvement in Joey's death. His contemplation to stand up against Johnny was fueled by his love for Edie and several nudges from Father Barry. The final straw was the murder of his brother, Charlie. Terry could not have made this impact by himself; it was the collective impact of these people and events that transformed Terry Malloy into a leader. ...read more.