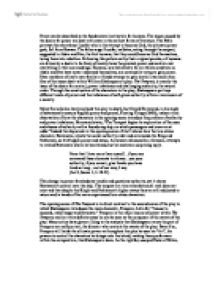 One of the issues dealt within William Shakespeares play, The Tempest, is exactly the issue of the desire for control, power imbalance and challenging authority, the natural order. Through the construction of the characters in the play, Shakespeare por

Power can be described as the fundamental motivation for humans. The issues caused by the desire for power are dealt with even in the earliest forms of literature. The Bible portrays the story about Lucifer who in his attempt to become God, the ultimate power grab, fell from Heaven. The fallen angel Lucifer, as Satan, acting through the serpent, suggested to Adam and Eve, the first humans, that they could become God themselves, luring them into rebellion. Following this pattern set by their original parents, all humans are driven by a desire to be God, ultimately have the greatest power and control over everything in their surroundings. Humans, now believed to be in a fallen condition as Adam and Eve have never redeemed themselves, are continually trying to gain power. Even members of one's own family or friends attempt to gain control over each other. One of the issues dealt within William Shakespeare's play, The Tempest, is exactly the issue of the desire for control, power imbalance and challenging authority, the natural order. Through the construction of the characters in the play, Shakespeare portrays different levels of power and the imbalance of self-given authority within a microcosm of a society. ...read more.

While giving thanks to his loyal friend Gonzalo, Prospero states this idea of the loss of his kingdom due to his absorption into books. Gonzalo...Knowing I loved my books, he furnished me/ From mine own library, with volumes that/ I prize above my dukedom. (Act I, Scene 2, L 161-166) Shakespeare achieves to construct Prospero's character as the all-knowing, most powerful persona in the play as he gives him through his knowledge and his "art" the authority and control over other characters in The Tempest. In the 17th century England there was a strict hierarchy. The king ruled the country by giving orders to nobles. He was in complete control of his kingdom and the nobles were the people who carried out his orders. These social levels are depicted in the microcosm of the English society within The Tempest. Prospero is in charge of everything, due to his magical powers, as he controls what happens on the island, therefore he can be considered as the 'king' of the island. A king in the 17th century could mould a society into whatever he wanted as long as he had enough power to enforce it and this is exactly what Prospero does, as Shakespeare constructs his character with the gift of knowledge of the supernatural powers. ...read more.

As wicked dew as e'er my mother brushed/ With raven's feather from unwholesome fen/ Drop on you both! A south-west blow on ye,/ And blister you all o'er! (Act I, Scene 2, L 322-325) Caliban's character is evidently upset with the power that Prospero holds over him and henceforth he represents Prospero's control over the island and other characters. In introducing Caliban's powerlessness to the play Shakespeare restates the great power of Prospero's character. Although the two characters, Ariel and Caliban, respond in different manners towards the commands of Prospero, their presence in the play develops the master-servant relationships which furthermore add to the construction of Prospero's character who has the most authority and power in The Tempest. Shakespeare's virtue as a playwright once again has worked in his favour to create another worldly known play, The Tempest, which remains a wonderfully written, highly atmospheric and fairly mysterious text. He explores the idea of power and how the desire for it is the fundamental motivation for humans. Through his construction of the characters he asserts all the power and control in the play into the main character Prospero. Finally he allows for Prospero's character to conclude the play with an epilogue, once again reinforcing the idea that this character holds the greatest power in The Tempest. ...read more.