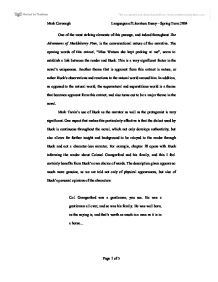 One of the most striking elements of this passage, and indeed throughout The Adventures of Huckleberry Finn, is the conversational nature of the narrative.

One of the most striking elements of this passage, and indeed throughout The Adventures of Huckleberry Finn, is the conversational nature of the narrative. The opening words of this extract, "Miss Watson she kept pecking at me", seem to establish a link between the reader and Huck. This is a very significant factor in the novel's uniqueness. Another theme that is apparent from this extract is nature, or rather Huck's observations and reactions to the natural world around him. In addition, as opposed to the natural world, the supernatural and superstitious world is a theme that becomes apparent from this extract, and also turns out to be a major theme in the novel. Mark Twain's use of Huck as the narrator as well as the protagonist is very significant. One aspect that makes this particularly effective is that the dialect used by Huck is continuous throughout the novel, which not only develops authenticity, but also allows for further insight and background to be relayed to the reader through Huck and not a character-less narrator. For example, chapter 18 opens with Huck informing the reader about Colonel Grangerford and his family, and this I feel certainly benefits from Huck's own choice of words. ...read more.

by mimicking what he has just heard. This could very well indicate his willingness to live as one with nature, as opposed to 'civilisation'. It perhaps suggests that he relates more with the natural world than with his current situation. Elsewhere in the novel, more natural features are raised. The Mississippi River, for one, is a major point of focus. Before the arrival of the duke and the dauphin, the river is very much a representation of freedom for Huck and Jim, as when they are on the river, they are both free from their individual oppressors (civilisation and slavery respectively). We can tell that Huck feels unbound through the lack of objection to other people, such as Miss Watson "pecking" at him in the extract, and he seems much less hostile towards the world: And afterwards we would watch the lonesomeness of the river, and kind of lazy along, and by and by lazy off to sleep. Wake up by and by, and look to see what done it, and maybe see a steamboat coughing along up-stream ... nothing to hear nor nothing to see - just solid lonesomeness. The importance of nature is highlighted here with the personification of the steamboat, which is a sign of the civilisation which Huck is trying to escape. ...read more.

Huck and Jim's acceptance of the supernatural probably suggests something about their characters. Jim, for example, has probably been brought up to believe these mystical occurrences, which would have been part of his heritage as an afro-american, and perhaps reflects a certain degree of wisdom. With Huck, on the other hand, this reflects a level of naivety, as he would have been brought up to think logically. However, outside influences such as Jim, and perhaps even Tom Sawyer, as well as his childish colourful imagination, have led him to believe that such things could happen. In conclusion, this extract encapsulates many of the themes and ideas of The Adventures of Huckleberry Finn. However, there are many other themes that are raised in other parts of the novel. For example, there is the issue of slavery and r****m, which is raised predominantly by Jim's involvement in the novel. Deceit is also another recurring theme, shown sometimes by Huck himself, but the main contributors to this are the duke and the dauphin. This extract, however, depicts the themes of the natural world, the supernatural world and the personal characteristics of the narrative extremely well. Mark Cavanagh Languages of Literature Essay - Spring Term 2004 Page 1 of 5 ...read more.