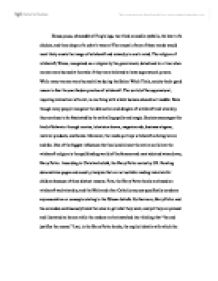 One of the primary reasons why children should not read Harry Potter books is the fact that the Christian denominations do not accept any relations dealing with witchcraft or wizardry.

Hocus pocus, abracadabra! Frog's legs, two fried crocodile eyeballs, the heart of a chicken, and three drops of a cobra's venom! The arousal of any of these words would most likely create the image of witchcraft and wizardry in one's mind. The religion of witchcraft, Wicca, recognized as a religion by the government, dates back to a time when women were burned at the stake if they were believed to have supernatural powers. While many women were burned alive during the Salem Witch Trials, society had a good reason to fear the unorthodox practice of witchcraft. The world of the supernatural, requiring interaction with evil, is one thing with which humans should not meddle. Even though many people recognize the destruction and dangers of witchcraft and wizardry, they continue to be fascinated by its enthralling spells and magic. Society encourages this kind of behavior through movies, television shows, magazine ads, business slogans, material products, and books. Moreover, the media portrays witchcraft as being heroic and fun. One of the biggest influences that has lured almost the entire world into the witchcraft religion is the spellbinding world of the famous and most admired wizard ever, Harry Potter. According to Christian beliefs, the Harry Potter series by J.K. Rowling demonstrates pagan and occult principles that are not suitable reading materials for children because of three distinct reasons. First, the Harry Potter books are based on witchcraft and wizardry, and the Bible and other Catholic sources specifically condemn any association or concepts relating to the Wiccan beliefs. Furthermore, Harry Potter and his comrades continuously break the rules to get what they want, and yet they are praised and illustrated as heroes while the readers are brainwashed into thinking that "the end justifies the means." ...read more.

Furthermore, in one part of the Harry Potter series, it is obvious of the main character's promiscuous behavior: The moral tone of Book II is set on page 30 where Harry discovers that the Weasley brothers were only able to rescue him by taking their father's bewitched car without permission. Fred Weasley comes up with a simple way to explain Harry's presence at their home: lie. But when this plan fails to work because Mrs. Weasley catches the boys coming home, the only thing they must endure is a brief lecture about how they could have been injured. Then, when Mr. Weasley finds out is sons flew the car, his first response is "Did you really? . . . Did it go all right?'" (Abanes). In response to the lack of disciplinary action, a concerned parent thought that "Through Harry Potter books and audios, children as young as kindergarten age are being introduced to human sacrifice, the sucking of blood from dead animals, and possession by spirit beings" (Foster). Similar to Foster, Kristen Sparks is appalled that such young children are permitted to read Harry Potter books. She has acknowledged the problem that parents are just too ignorant to see the harmfulness of the Potter series. Moreover, many people undermine the detrimental effects that Harry Potter books can cause, claiming that the sorcery, spells, and other similar occult practices are less than harmful. People continue to act as if the Harry Potter books are just like any other novels on the bookshelf, but very slowly, the underlying message that J.K. Rowling presents will become clear to our youth, and only then will people begin to worry (Sparks). ...read more.

charm and power, there are these: occult activity is liberating, noble, exciting, and not what your parents and Christians in general say about it" (O'Brien). Thus, J.K. Rowling has successfully managed to brainwash millions of readers, and has created a book that should be banned from all bookshelves so that the world's youth may be kept innocent. Ultimately, the Harry Potter series is a manipulating way in which the Wicca religion can recruit young children and corrupt their world. These Potter books of wizardry are not proper reading books for particularly Christian children because they are paganistic, encourage illegal activities, and portray Wicca as an enticing religion that is full of magic. Moreover, Harry Potter books disobey the laws of Christianity, influence children to act dishonestly, and taint the pure souls of children with dangerous ideas. Every minute that we ignore this controversy, the number of innocent youthful children lessens. Humanity needs to recognize that the greatest concern is that the godly fear that protects mankind from dabbling in the spirit world is being taken away from children who read the Potter series (Foster). If we allow this to continue, we are ourselves accepting the demon like ways of the supernatural world and dishonoring the Lord Almighty, God. Therefore, the mad wizard behind the Harry Potter books needs to be stopped, or else she will succeed in destroying our somewhat sane world. J.K. Rowling is trying to re-revolutionize the traditional Christian religion and create discord amongst the loving relationship we share for God, and she is doing so by targeting the most important part of society, the ingenuous little children. So to conclude, stop Harry Potter and save God's little children! ...read more.