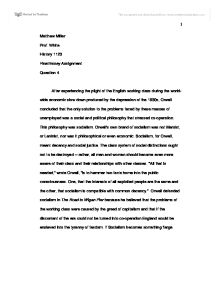 Orwell defended socialism in The Road to Wigan Pier.

Matthew Miller Prof. White History 1123 Final Essay Assignment Question 4 After experiencing the plight of the English working class during the world-wide economic slow down produced by the depression of the 1930s, Orwell concluded that the only solution to the problems faced by these masses of unemployed was a social and political philosophy that stressed co-operation. This philosophy was socialism. Orwell's own brand of socialism was not Marxist, or Leninist, nor was it philosophical or even economic. Socialism, for Orwell, meant decency and social justice. The class system of social distinctions ought not to be destroyed -- rather, all men and women should become even more aware of their class and their relationships with other classes. "All that is needed," wrote Orwell, "is to hammer two facts home into the public consciousness. One, that the interests of all exploited people are the same and the other, that socialism is compatible with common decency." Orwell defended socialism in The Road to Wigan Pier because he believed that the problems of the working class were caused by the greed of capitalism and that if the discontent of the era could not be turned into co-operation England would be enslaved into the tyranny of fascism. ...read more.

Social mobility is one of the givens of our age. Accidents of birth and race are less of a barrier to what an individual can achieve than they used to be. At least, so we are lead to believe. The need to believe this illusion lies in our unease with class divisions. It is easier to pretend that they do not exist. So there is no progress. Orwell's experiences lead him to believe that the unemployed will remain unemployed, and that there is never any hope of them being able to improve their conditions. He observed that the re-education programs of the time had all failed and that they would continue to fail. Capitalism, he believed, had created this problem and would continue to make it worse. Since the competition of capitalism would not be able to re-employ these men, he believed that co-operation through socialism would be able to provide a better way of life for these people. Orwell also saw the world splitting into political factions: fascism and socialism. Fascism, to Orwell, was a danger because it enslaved the workers. ...read more.

I think that democratic socialism is a bit na�ve in it's nature. But Orwell is right about the class separation in the UK as a contributing factor to the non-caring attitude they seem to have to all the people in Wigan and other Wigan-like communities. Lower classes are looked at as filthy animals and dirt seems to be a big preoccupation of the view of the working class. Orwell does try to cut into that with a lengthy discussion on the rigorous process the coal miners have to go through to get clean, trying to help fight certain prejudices and beliefs. Certainly Orwell seemed to care about what happened and present a situation where he thought it could work. Part of that plan was to question many of the beliefs of socialism at the time and to question the direction of the movement in an attempt to bring real debate and reform into the socialist movement. Then socialism would be equipped to help the working class, and the working class would be accepting of it. The only problem I see is that I don't view socialism as a viable, real world remedy to the ills of Wigan. 1 ...read more.