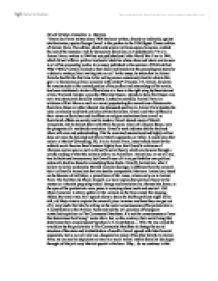 Orwell & Marx Animalism vs. Marxism �Every line I have written since 1936 has been written, directly or indirectly, against totalitarianism, quotes George Orwell in the preface to the 1956 Signet Classic edition of Animal Farm. The edition, which sold several millions copies, however, omitted the rest of the sentence: and for democratic Socialism, as I understand it.� It is in Animal Farm, written in 1944 but not published until after World War Two in 1945, which Orwell offers a political and social doctrine whose ideas and ideols can be seen in all of his proceeding works. In an essay published in the summer of 1946 entitled Why I Write,� Orwell claimed to have been motivated over the preceding ten years by a desire to make political writing into an art.� In the essay, he states that in Animal Farm he had for the first time in his writing career consciously tried to achieve this goal � to harmonize political concerns with artistry� (Twayne, 17). Orwell, however, for reasons such as the omitted portion of his preface and misreadings of his novels, has been mislabeled a traitor of Socialism or a hero to the right wing by theorists and critics. His book, besides a parody of Stalinist Russia, intends to show that Russia was not a true democratic Socialist country. Looked at carefully, Animal Farm is a criticism of Karl Marx as well as a novel perpetuating his convictions of democratic Socialism; these are other inherent less discussed qualities in Animal Farm besides the more commonly read harsh criticism of totalitarianism. Orwell and Marx differed in their views on Socialism and its effects on religion and nationalism as well as Socialism's effects on society and its leaders. Orwell shared many of Marx's viewpoints, but he did not share with Marx the same vision of a utopian future, only the prospects of a worldwide revolution. ...read more.

at The Battle of Cowshed � The only good human being is a dead one�. A serious objection by Orwell on Marxism and Trotskyism is their conviction of Socialism's victory by any means necessary. Though hard-working proletarian Boxer, after a subsequent attempt at taking over the farm by the humans, says, I have no wish to take life, not even human life� (49), his damage has already been done, having killed a man. Boxer, representative of the anti-capitalistic Boxer Rebellion of 1900 in China, may speak of pacifism, but his words are coming from the mouth of a horse who has killed. To Orwell, Socialism through warring was just as decadent as what Socialism was supposed to overthrow � capitalism. Orwell did not want war because it would put Socialism on the same scale as its enemy because, as Vladimir Lenin wrote, capitalism led to war � not Socialism. Where Animalism stresses a long process and some sort of mechanism, classical Marxism misses the essential nature of revolution as a complex and extended process. It offers no conception of the natural sequence of stages in the revolution� (Daniels, 12). Another criticism Orwell had of Marx was the idea that one man could foresee the future and predict the actions of men, as Marx had done in many of writings. Orwell the novelist could write fictional political tales about the future as he did in Nineteen Eighty-Four, but he believed no man could accurately understand the nature by which man acts. The main weakness of Marxism,� wrote Orwell: is the failure of human motives... As it is, a �Marxist analysis' of any historical event tends to be a hurried snap-judgement based on the principle of ciu bono?... Along these lines, it is impossible to have an intuitive understanding of men's motives, and therefore impossible to predict their actions� (The English..., 193). It is a criticism evident after the rebellion in Animal Farm, as each animal's heart driven motivations drives them to individually try and make life better for themselves and leads the pigs towards greediness and the eventual assertion of power. ...read more.

When a revolution does occur, however, as it does on Manor Farm, it eventually shatters and forms a whole new society in need of another, as it does on Manor Farm, a microcosm of revolutionary societies. It is a comment on the ever-increasing gap in the distribution of wealth and its affects on the proletariate as well as a criticism on Marxist theory of revolutions and dialectic materialism. Combined with Orwell's theories on man, Orwell is opposing here more than the Soviet or Stalinist experience. Both the consciousness of the workers and the possibility of an authentic revolution are denied� (Williams, 73). In Animal Farm, Orwell, like Marx in many of writings, wrote for the common man whose place in society was of utmost importance but of little recognition. Orwell's use of satire in the form of a fairy story,� as he calls it on its title page, to get his point across shows his indignation for hard-core ideological doctrines whose purposes are to lead to the eventual destruction of a society. Another general aim of Animal Farm as a satire is to offer itself as an example of temperate, responsible criticism � in no way a rancorous verbal assault� (Twayne, 106). It is a generally sympathetic criticism of Marxism that offers to ease many of Marx's statements about man, revolution, religion and society. It is a moderate Marxism whose definitive ideas are not really stated, but whose ideology surely exists throughout the novel. Orwell's Animalism shares many of the same beliefs as Marxism, but its political goals are not as extreme, its trust in revolution is not as confident and its (Orwell's) forecast of the future is not as utopian as Marx's. Successful Animalism is the political and social doctrine George Orwell waited years to write; often misconstrued and rarely considered more than a criticism of totalitarianism, its natural tendency to be compared with Marxism has been too often overlooked. ...read more.