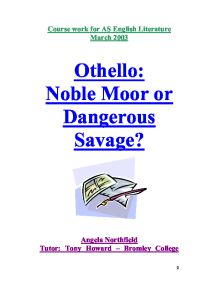 Course work for AS English Literature March 2003 Othello: Noble Moor or Dangerous Savage? Angela Northfield Tutor: Tony Howard - Bromley College Othello: Noble Moor or Dangerous Savage? When looking at this question, we need to evaluate Othello's character throughout the events of the play and consider the different settings and ordeals to which he is subjected. In the opinion of A C Bradley, Othello is '...not naturally jealous but trusting in Iago' whereas F R Leavis considers 'the tragedy' to be ' ...Othello's character in action'. That Iago uses and manipulates the Moor during the play is obvious and Iago himself proclaims this '...in following him, I follow but myself.' ACT I.1.59. One must consider whether the radical change displayed by Othello is a result of Iago's manipulations and incitements. The natural trust in his ensign may have resulted in Othello's downfall or it may be possible that Othello truly was hiding his savage nature. By considering Othello a 'Noble Moor', he is then, a man with high ideals whose courage and selflessness are impressive to those around him. The reference to 'Moor' could be taken as a description of his origins (Moroccan) ...read more.

2. 63. His views are unquestionably prejudiced; Brabantio has lost a daughter without his consent and he clearly views Othello's colour with intolerance. This intolerance is also expressed by Roderigo who labels Othello 'thick-lips' ACT I. 1. 66, which is an obvious racial slur. Although Roderigo is a rejected suitor of Desdemona and an ally of Iago and as such can be dismissed as a reliable source, his and Brabantio's views of Othello's race do give insight into the underlying racial prejudice in Venice at the time. This underlying tension will inevitably serve to increase Othello's feelings of insecurity about himself as a worthy husband for Desdemona. Up until the end of Act 3 scene two, Othello has displayed no real characteristics of that which we could term savage. Even his dismissal of Cassio in Act 2 scene three, a difficult and emotional task, was handled calmly and eloquently; 'My blood begins my safer guides to rule, And passion having my best judgement collied Assays to lead the way.' ACT II. 3.186-8 It is not until Iago begins his insinuations of Desdemona's betrayal, that a change is seen in Othello's character. ...read more.

Othello's final speech can however, be viewed with in less forgiving light as in that of Leavis, there seems to be 'no learning through suffering'. Othello does not express regret at killing his wife but he does in fact forgive himself and justify his actions. Rather than admitting to his mistakes and learning from them, Othello considers himself the victim and for a man who wishes to be seen as courageous, is permitted the ideal suicide; 'Set you down this...And smote him thus.' ACT V. 2 347-52 I personally feel that Othello is not entirely 'primitive in social and cultural development' but a man whose exchange for a life of brave leadership in warfare to that of inexperience in courtly love, led to the realisation of his own weaknesses. His inability to deal with a situation in which he did not command absolute control gave sway to his inherent feelings of insecurity resulting in actions the like of which he could not have foreseen. His eloquence and calm commands show his natural nobility. However, his violent fits of rage convey the inner savage that his insecurities have created but do not reflect his character in its entirety. There is no question that some savage qualities exist, however they only become apparent because of the astonishing nature of Iago's manipulations and his ultimate desire for Othello's destruction. ...read more.