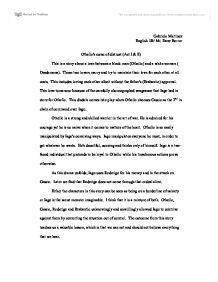 Gabriela Martinez English 1B/ Mr. Dave Borror Othello's curse of distrust (Act I & II) This is a story about a love between a black man (Othello) and a white woman ( Desdemona). These two lovers marry and try to maintain their love for each other at all costs. This includes loving each other albeit without the father's (Brabantio) approval. This love turns sour because of the carefully choreographed vengeance that Iago had in store for Othello. This disdain comes into play when Othello chooses Cassio as the 2nd in chain of command over Iago. Othello is a strong and skilled warrior in the art of war. He is admired for his courage yet he is so naive when it comes to matters of the heart. ...read more.

I find this story to be intriguing. I also think that it is cleverly written when Iago and Roderigo wake up Brabantio to inform him of his missing daughter. It is just so funny to hear how clever Iago was with his choice of words when he said "Look to your house, your daughter, and your bags! Thieves, thieves! ...Are your doors locked? ..." I find that passage really entertaining since he already knew what was going on but he had to lead Brabantio to believe otherwise. I think that the Duke of Venice was the character in this story that was the most objective and acted in the most judicial manner. Although, I believe that most of his actions were in part due to his own needs as well as his country. He also displayed a very fair judgment to both parties. ...read more.

He not only is two-faced, he is multi-faced. He befriends Montano, Cassio, Roderigo and Othello all the while plotting against them. He just uses them to get back at Othello for not choosing him as his 2nd in command. He does this by implanting different ideas into their head to make them react as he wants. He guides them like puppets. Iago makes Montano believe that Othello has a poor choice in decision making when he chose Cassio over him for the position. Iago makes Cassio believe that he is his friend that will help him get his position back when all the while he was the one responsible for helping him lose his position. Iago also leads Othello to believe that he is trustworthy even though he really is not. I cannot wait to continue reading on. I want to see how the story continues to unfold. ...read more.