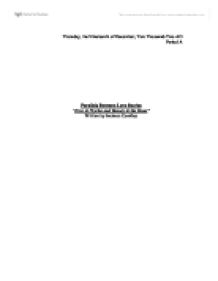 In the story of Beauty & the Beast, the common people of Belle's town react to the Beast with fear, drawing wild assumptions about his personality based on his appearance. The same situation is presented in the story of Cupid & Psyche. Psyche's sisters, upon hearing that she has been forbidden to look on the face of her husband, automatically fear him. They assume that the reason she is not allowed to see him is that he is a hideous monster, too ashamed to be seen in daylight. Also, in both stories, the protagonist-lovers suffer the pains of forbidden love, and eventually overcome the hardships others put them through. In the story of Cupid & Psyche, Psyche is not allowed to marry Cupid because he is an immortal god. ...read more.

This same fear is shown in Beauty & The Beast, when the Beast grows fearful and puts on a front of spitefulness when he is intimidated by Belle's grace. He feels deficient. Also, in both stories, the characters undergo a physical and mental change as the story progresses. In Beauty & the Beast, the Beast is transformed from a pompous, arrogant prince into a hideous, self-loathing beast, then to a handsome, benevolent man. In Cupid & Psyche, Psyche transformed from a mortal into an immortal by eating the bread of the gods. In both cases, the characters became much the wiser after their ordeals. Therefore, parallels can be drawn between all types of mythology, from the written word to the theatre; spoken tales to the silver screen. The love tales of Eros & Psyche and Beauty & the Beast are prime examples of these mythological parallels. ...read more.