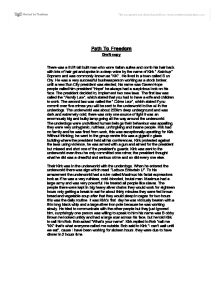 Path To Freedom Draft copy There was a 6.5ft tall built man who wore Italian suites and comb his hair back with lots of hair gel and spoke in a deep voice by the name of Kirk "Ketchup" Soprano and was commonly known as "KK" . He lived in a town called Sun City. He was a very successful businessperson working as a stock broker, until a new Sun City president was elected, his name was Gaven Hope people called him president "Hope" he always had a suspicious look on his face. The president decided to, implement two new laws. The first law was called the "Family Law", which stated that you had to have a wife and children to work. The second law was called the "Crime Law", which stated if you commit over five crimes you will be sent to the underworld to live with the underdogs. The underworld was about 250km deep underground and was dark and extremely cold; there was only one source of light it was an enormously big and bulky lamp going all the way around the underworld. ...read more.

Bob asked "What's your name". Kirk replied to Bob "call me "KK" that's what everyone called me outside. Bob said to Kirk "I can't wait until we eat", cause I have been working for sixteen hours. they were due to have dinner in 2 hours time. Kirk and Bob sat next to each other talking about the daily routine Bob asked Kirk how did u get here? Kirk told him about the two new laws that were implemented. Bob asked him what five crimes did he commit. Kirk replied " I only committed one crime but everyone thought it was very serious. I disagreed against the "crime law" because I thought that it was too harsh, I thought we should just go to jail and do our time. I went to the group centre and tried to shoot the president but missed and shot of his guards". Then Kirk asked Bob "ever thought of getting out of this place". Bob replied "what you mean...escaping"? Suddenly Kirk replied in a solemn voice "well yeah". Bob said "yeah and I have an idea". ...read more.

A few seconds later they arrived at their destination. To their surprise the wormhole got blocked because metal objects were forbidden to go through, but you could leave the wormhole carrying a metal object From the underworld only but then it would be blocked. Bob asked Kirk " what are we going to now"? When they heard a large cheering crowd, the crowd came closer they saw a large sign that read "thank god the "family law" and the "crime law" has been withdrawn". Kirk asked a man from the crowd "why was the two laws withdrawn? The man told him that the whole town went against the president, the president did not like this and left this town. Now we have a new president who has agreed to listen to the public before making a decision. Kirk said to Bob " I am going to earn some money by working and then take a long vacation. How about you Bob? Bob replied "I'm going to meet up with an old friend then I will see. Kirk said to Bob " hope to see you around". That was it! ...read more.